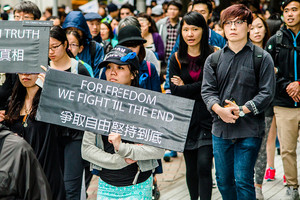 As part of that ongoing conversation, I had the opportunity to join a group of editors at a meeting with the then-Prime Minister of Thailand Yingluck Shinawatra.

What a difference a year makes. Not only has Yingluck been deposed, but Thai journalists have seen those discussions become a harsh reality, as anti-government protests turned violent, increasing the risks in covering them, and a military coup imposed severe restrictions on the news and opinions that Thai media can publish and broadcast.

Thai journalists are not the only ones who had a tough year. Political and social uprisings in several countries posed new risks for reporters and new challenges for editors in the way they cover these events.

Journalists in Venezuela, Brazil and Ukraine have been killed or wounded while reporting on street protests and clashes between security forces and protesters.

Beatings, arbitrary detentions, theft or destruction of equipment, and threats of legal action have put journalists in a very difficult situation when they do their jobs of reporting on social or political instability. Some have even paid with their lives.

Journalist security and protection is an evolving field, always responding to different forms of aggression. This past year was no exception in places like Ukraine and Venezuela, for example. In these countries the risks for journalists increased when gunfire appeared during several protests. As Frank Smyth, of the Committee to Protect Journalists, pointed out, “Covering street protests is one thing. Covering gunfire is another”.

This resulted in dozens of journalists killed or injured when doing their job. In addition to this, the government’s attempt to control media sources has led to increasing cases of censorship or crackdown.

In Brazil, as the FIFA World Cup sparked anti-government protests joined by thousands of people, one journalist has been killed and dozens more have been beaten, detained or harassed, both by police officers and protesters unhappy with their coverage. As the World Cup approaches and then is followed by the 2016 Olympic Games in Rio de Janeiro, we can only expect more protests, and more violence. But Brazilian journalists not only face physical attacks, they are also subject to growing cases of judicial censorship.

This is only an overview of events in the past year, but it highlights the need for reporters and editors, and their companies, to take steps to improve the protection of journalists covering potentially violent events.

Newsrooms would be well served by applying safety and protection protocols for reporters that include an evaluation of the risks faced in particular areas of coverage, as well as measures to mitigate risks or to react to a dangerous situation. This requires not only awareness of the risks faced, but also training and investing in protective measures.

Digital security has also become a “must” for journalists, as they can experience attempts by outside forces to penetrate their communications, data bases or social networks in order to spy, intimidate, censor or disparage a journalist or news organization.

Also, there is also a need to treat the impact that violence has on journalists, as they experience post-traumatic stress as a result of their work.

The events of the past year have shown that journalist security and protection is an issue that will take an increasing importance in newsrooms around the world.

These themes will be further explored at next week’s World Editors Forum to be held in Turin, Italy, during a Press Freedom Roundtable on Sunday, June 8, and during an interview with UNESCO’s Director of Freedom of Expression and Media Development on Wednesday June 11.