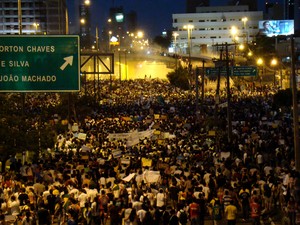 Since Brazil won the right to host the competition, the country’s security forces have been locked in a drawn-out battle to reduce crime and quell protests as they seek to protect visiting fans and maintain the country’s rosy image.

But crime is once again on the rise and faith in President Dilma Rousseff’s government is wavering. Following widespread protests during last year’s Confederations Cup – the worst public unrest Brazil has seen since 1992 – people are once again taking to the streets.

In a country where 16m people live in extreme poverty, $11 billion has been pumped into the World Cup, and this is seen as a lavish expense when basic infrastructure like healthcare and transport are in such dire need of investment.

And though protests have yet to reach the scale of those in 2013, there is a risk that journalists could once again be caught up in violent clashes between protesters and police: the Brazilian Association for Investigative Journalism (Abraji) reports that in the last year there were 170 attacks on journalists covering protests.

The majority of these have come from police – journalists have been beaten and seriously injured by rubber bullets, while recording equipment has been seized and destroyed in an attempt to stifle coverage.

An Amnesty International Campaign highlights a lack of preparation and training as one of the causes of this police brutality, with 60% of police officers involved saying they felt ill-equipped and under-trained when dealing with protests.

The police came under fire for their heavy-handedness last year, and have since received more training. But Manso describes Brazilian police as “very emotional”, saying that once situations become tense “rational strategies and training are forgotten.”

A report from Brazilian NGO Conectas recently described how police dispersed a peaceful protest in Sao Paulo, firing teargas indiscriminately into a crowd of people. Joao Paulo Charleaux, who works at Conectas and studies police behaviour, described it as “a pattern of police violence that will be repeated during the coming days.” Indeed, the recent metro strike in Sao Paulo has born this out.

This violence is only exacerbated by a culture of impunity. Despite Manso’s newspaper possessing video evidence of police brutality, only one officer has been investigated since the 2013 protests, contrasting sharply with the 300 or so demonstrators under investigation.

But violence also comes from the protesters. On 6 February cameraman Santiago Andrade was killed when two demonstrators fired a flare at his head. And although most demonstrators pose no threat to journalists, there is a consensus that 2014’s protests will be dominated by more extreme movements like the anarchist ‘Black Blocs’. According to an academic who studies protest movements in Brazil, this could mean more violence.

“For the Black Blocs, the massive demonstrations in June 2013 had no political answers, so the way of non-violent demonstrations is over,” Professor Esther Solano of the Federal University of Sao Paulo, told CNN.

A risk is that some may intentionally target journalists. Manso pointed out that TV journalists – who are more clearly identifiable – could be attacked if they are perceived to work for publications that “lie” about the protests.

There is growing awareness of these threats. Andrade’s death in February came as a wake-up call for the Brazilian press, and in March the Human Rights Secretariat (SDH) introduced new proposals to protect journalists. But little progress has been made since, according to Abraji’s Secretary-General Guilherme Alpendre.

“For now, the only tangible proposal agreed by SDH is the implementation of a program to protect journalists and other human rights advocates. But for the moment, though it could actually produce a positive result, the SDH did not establish a deadline for its creation neither set a budget for its maintenance”, he told WAN-IFRA.

With the government providing few concrete assurances, it has been down to the journalistic profession to ensure that they are able to cover the World Cup and its tumultuous backdrop without the threat of violence.

At Grupo RBS, one of the country’s biggest media conglomerates, they are taking steps to avoid confrontation with protesters. Marcelo Rech, Director of Journalism at the group, told WAN-IFRA that his journalists would “…not “infiltrate” in groups organizing protest, in order to avoid conflicts between the radicals and the “mass media”.

He also said that they have opened “conversations with ultra-Leftist parties trying to get their respect for our neutral and independent position while covering the protests.” With some blaming the ‘Black Blocs’ for the attack on Santiago Andrade, this could be key. But whether RBS journalists can negotiate with a police force that continues to flout rules on the public’s right to document their actions is another question.

The cameraman’s death also raised concerns about journalists’ lack of preparation for conflict zones. Andrade was wearing little protective clothing when he was attacked, and while many around him stood by and watched, it was BBC correspondent Wyre Davies who rushed to his help, a reaction he later attributed to his “hostile environment” training.

Rech said that RBS journalists will wear helmets and gas masks while working on the street, while Abraji is about to publish a security guide for journalists covering protests. “This, together with training sessions conducted by professional unions and the International News Safety Institute, may contribute to change this scenario,” Alpendre said.

For now, the situation remains relatively stable. But the true test will be when the home team kicks off against Croatia on the 12 June, and the world’s gaze is fixed on Brazil.