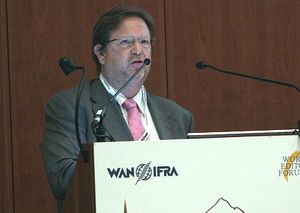 Readership engagement is a new metric system part of EMMA that studies audience engagement with news on multiple media. Thousand of interviews covered 189 publications. “This will get the account managers of newspapers excited about this,” says Hollands. The metrics will allow publishers to examine qualitative data.

“We fuse print readership data we created with EMMA with Nielsen online data,” Hollands said. The metric shows the differentiation between weekday and weekend readership, allowing publishers and advertisers to gain a better insight into what their audience is engaging in during specific times.

“The most efficient combination of print and online can be shown through EMMA,” says Hollands.

EMMA also examines readership motivation, studying the content that attracts and encourages audience engagement. “Motivation is a powerful metric,” according to Hollands.

The metric system uses more than 600 different titles, gathering information via telephone. “In a market of 23 million people we serve 54,000,” says Hollands.

“Know what section your target audience is reading,” Hollands said. “One thing we have learned from this is that our audience is growing.”