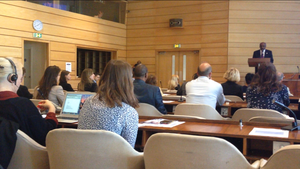 The €8 million EU-supported Networks of Mediterranean (NET-MED) Youth Project will aim to empower young people in the southern Mediterreanean region with a focus on facilitating greater participation in national policy making, input into youth unemployment issues and more active representation in mainstream media.

The media component of The Project addresses the need to re-engage youth with traditional media formats as a platform for youth voices and youth related issues.

“Youth in the target countries [is] not represented to the same extent [in] mainstream media as in social media, so we want to increase the connection between youth organisations so that thier views are better represented in traditional media,” said Rosario Soraide, assistant project officer at UNESCO.

“Media is a key tool for advocacy, for positioning youth on the issues that are of key importance to them. In particular, areas of policy, political education, environment, anti-corruption,” she said.

The Network will also promote awareness of freedom of expression and media information and literacy, monitor media coverage of youth issues and facilitate interaction between young journalists and media organizations.

“[The] media is an ally to the broader objective of the project which is to enhance citizen engagement, policy making and policy review related to youth issues,” said Soraide.

Media organizations are encouraged to contact their local UNESCO offices if they would like to be involved with the NET-MED project.