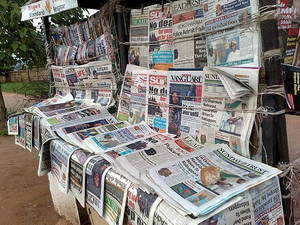 Newspapers including the Leadership, Daily Trust, The Nation and The Punch said their distribution vans were either stopped or seized in several cities across the country. As the clampdown continued through 10 June, the Director of Defence Information, Major General Chris Olukolade, defended the operation until “satisfied” with security checks on the country’s newspaper distribution networks.

Nigeria’s main newspaper distribution points were affected, such as Abuja, Kaduna, Kano, Jos, Maiduguri and Ibadan.  Drivers conveying copies of the Leadership on Friday morning claimed that armed soldiers at the Kaduna toll gate seized the drivers’ papers and held them hostage without giving them any reason, the newspaper reported on its website. Entering the third day of the clampdown, The Nation said that vendors in several places were rejecting copies for fear of being arrested or beaten, and that in some parts of Lagos soldiers beat up vendors who displayed the newspaper.

Newspapers expressed concern for what they consider to be an unjustified siege on media, as the Newspaper Proprietors Association of Nigeria stated on 7 June: “we do not believe that given the already tense situation in the country the government or any agency acting in its name, will engage in acts that can only stifle free speech and encourage rumours to fester.”

The Nigerian Guild of Editors (NGE) further condemned the siege on newspapers across the country by security agencies, and deplored the huge economic loss imposed on publishing houses. Criticisms were echoed by opposition parties such as the All Progressives Congress (APC), which qualified as “disingenuous and ridiculous” such an explanation that an intelligence alert was responsible for a clampdown on the media. The Nigeria Labour Congress (NLC) has urged affected media outlets and vendors to demand compensation for losses suffered as a result of the restrictions.

The media clampdown comes days after Nigeria’s information minister, Labaran Maku, warned the media not to give “free publicity,” saying they must “define the lines between the urge to report and the need to protect the interest of our nation.” Some of the most targeted newspapers had recently published critical articles about the army. The Leadership daily notably reported on 3 June that army personnel, including ten army generals, had been court martialled and found guilty for complicity with the radical Islamist group Boko Haram. The military rejected these media reports as “falsehood” and described them as “very unfortunate and meant to do maximum damage to the image of (the) Nigerian Army and its personnel.”

The Nigerian government under President Goodluck Jonathan has been facing heavy public pressure to do more to tackle the insurgency led by Boko Haram, which seeks to establish Islamic rule in the north of the country. Nigeria’s slow response to the abduction of 200 schoolgirls by Boko Haram in April drew criticisms, while a widespread social media campaign “free our girls” has prompted greater international scrutiny of the counter-insurgency.

Journalists have been targeted by both sides in the struggle between Nigerian authorities and Boko Haram.  Amid reports of continuing atrocities perpetrated by the outlawed group, Index on Censorship noted how the Nigerian government’s “war on terror” has been used to target the country’s journalists: “Security agents have abused the pretext of their own “war on terror” to threaten, harass, arrest, detain, and seize the equipment of local reporters.”

In one case in December 2013, police assaulted broadcast journalist Yunusa Gabriel Enemalion under the pretext of being a “Boko Haram suspect,” after he took photographs of a policeman demanding a bribe.

Journalists covering protests since the kidnap of the schoolgirls have also been targeted. Hir Joseph of the Daily Trust newspaper was arrested on 9 May and charged with ‘injurious falsehood’ after he wrote a story detailing how female police officers and other security officers had joined protests calling on the government to do more to rescue the kidnapped girls.

The most recent actions by the army and security forces risk further alienating the media and the general population in its fight against terrorism. Sue Valentine, Africa programme coordinator for the New York-based Committee to Protect Journalists (CPJ) warned that “denying Nigerians access to news and information sows the seeds of rumours and distrust.” “While we recognize that Nigeria faces security threats, these can never effectively be addressed by media blackouts or persecution of journalists,” she added.