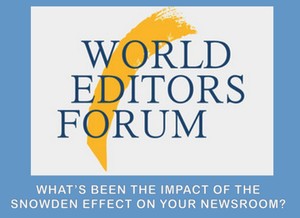 The survey was formally launched at the World Editors Forum in Turin, Italy, during a session featuring UNESCO’s Director of Freedom of Expression and Media Development, Guy Berger.

“More than 100 countries have laws or jurisprudence protecting journalists’ sources, and these may need to be updated to deal with digital issues because of the uncertainty that has arisen,” he said.

The emerging reluctance of sources to blow the whistle on states and corporations in the post-Snowden era was also a point made by AP’s CEO and President Gary Pruitt during a session of the Turin conference. “It’s created a very real chilling effect among our sources,” Pruitt said. “They’ve become nervous about talking with us. They don’t want their phone numbers associated with us. And government employees who previously routinely talked to us, now won’t.”

Late in 2013, UNESCO’s 195 member states adopted a resolution on freedom of information and privacy, formally recognising the value of investigative journalism to society, and the role of privacy in ensuring that function.

“…privacy is essential to protect journalistic sources, which enable a society to benefit from investigative journalism, to strengthen good governance and the rule of law, and …such privacy should not be subject to arbitrary or unlawful interference,” the resolution reads in part.

Even before the Snowden revelations, Frank la Rue, UN Special Rapporteur on the promotion and protection of the right to freedom of expression and opinion, noted:

“Journalists must be able to rely on the privacy, security and anonymity of their communications. An environment where surveillance is widespread, and unlimited by due process or judicial oversight, cannot sustain the presumption of protection of sources.”

UNESCO’s Berger observed in his remarks at the World Editors Forum that secrecy and confidentiality of sources were no longer necessarily the same thing.

GUY BERGER, UNESCO“It is now becoming important to secure or strengthen legal  protections for confidentiality, precisely in order to to deal with cases  where secrecy may be hard for journalists to guarantee.”

Berger also encouraged journalists to conduct a risk assessment to determine how vulnerable their information and systems are, and he urged editors to offer their newsrooms digital protections for communications and files.

Additionally, he proposed an editorial response to the chilling effect: “If you aren’t going to get as many whistleblowers because of surveillance,” he said, then respond to data issues with data: “…increase investigative reporting through data analysis.”

Finally, Berger urged editors to encourage public debate and to make innovative suggestions to governments following the call by the UN last November for states to review surveillance activities and set up independent oversight bodies.

Meanwhile, the need to continue to report on the implications of Snowden revelations has also been highlighted by the release this week of a comprehensive global analysis of the impact of the Snowden leaks by the London School of Economics’ Simon Davies. Davies concludes that media coverage of the issues has declined globally to less than two percent of the initial traffic of a year ago and it continues to diminish. “As a consequence, public concern about the issues raised by the disclosures has – at best – reached a plateau. This drop-off is particularly steep in non-US and non-English language media”, he reports.

* Editors and senior journalists are urged to participate in the World Editors Forum online survey here – it takes just five minutes to complete and we hope it will generate knowledge we can share globally with a view to advancing the protection of investigative journalism in the post-Snowden era. The survey will close on July 15th.