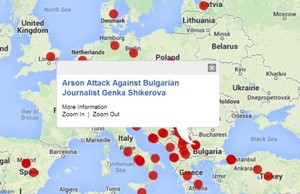 Over the past year, crackdowns on media and restrictive provisions in Turkey’s criminal code and anti-terrorism legislation saw more journalists forced from their jobs for reporting on politically sensitive issues. In Montenegro, investigative reporter Tufik Softić faced repeated attacks, including a bomb in his back yard, while the government also sought to cut funding to critical media. In June 2013, the Greek government forced the public broadcaster ERT to shut down, as libel suits and surveillance against journalists also increased. Other EU states lingering in Freedom House’s 2014 “partly free” category include Italy, Hungary, Bulgaria, Croatia and Romania.

Some of the most extreme examples can be found in EU-candidate Macedonia, where journalist Tomislav Kezarovski was sentenced to 4.5 years in October 2013 for refusing to name his source. A report published by the International Federation of Journalists (IFJ) in May 2014 paints a “gloomy picture” on the media situation in the Balkans and former Soviet Union, where attacks and threats against journalists are often committed in a climate of impunity, and where legislation threatens to punish more outspoken media. According to Jasmina Popovic, former President of the Trade Union of Croatian Journalists, “the protection of journalists today is considerably lower than in the 1990s.”

Even among countries that pride themselves on respecting civil liberties, the United Kingdom dropped in Freedom House’s “free” ranking after government authorities used the Terrorism Act to detain David Miranda, the partner of investigative journalist Glenn Greenwald. Authorities last year also raided the offices of The Guardian newspaper and forced the editors to destroy hard drives with data on US-led mass surveillance.

“There is perception that media freedom is taken for granted in Europe. Most people believe that there are no violations on media freedoms and that is actually not the case,” observes Melody Patry, Index on Censorship’s senior advocacy officer. Collecting reports submitted by regional correspondents as well as independent journalists and news organisations, the open source platform provides a tool to report violations and advocate for press freedoms across EU member and candidate countries. According to Patry, the map collected more than 62 incident reports within a week of its launch.

“Most journalists are not represented by a union and there is an increasing number of freelancers,” explains Patry. “We wanted to provide them with a user-friendly tool, which is easy to use with a mobile device, where journalists can specify what kind of support they need, for example if they need legal assistance. We also give journalists the discretion if they want their report to be made public.”

Relying on a network of regional correspondents to monitor and investigate reports, the site also includes an alert system that allows individuals to register and receive updates based on their regional interests. Funded by a DG Connect grant from the European Commission, it is part of a one-year project led by several partners including the Index of Censorship and the think tank Osservatorio Balcani e Caucaso, which is also conducting a study analysing the needs of journalists in 11 countries in Italy, South East Europe and Turkey.