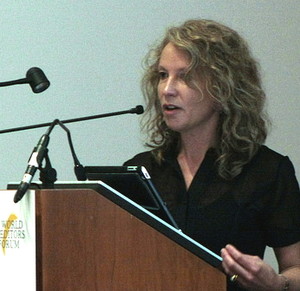 “People love news,” Raitt says. “It doesn’t matter how old they are, they are spending more time with news now than ever before.”

One of the key things people are doing on tablets and smartphones is searching the news, she says.

She highlights La Presse, a Montreal newspaper that has “created very engaging editorials and ads on their devices.”

Raitt quotes a Norwegian newspaper that has said, “We want our mobile ads to be as engaging as our editorial content,” encompassing the future of newspaper advertising on mobile and tablet devices.