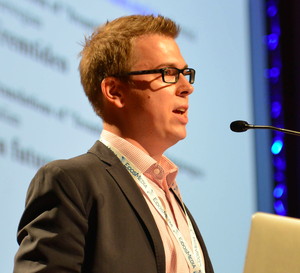 Efficient use of limited resources is the main challenge facing thousands of small- and mid-size publishers all over the world as market pressure ratchets up amid their multimedia transformation. “It’s about surviving with your backs against the wall,” says Eirik Hoff Lysholm, editor-in-chief and CEO of Dagsavisen in Norway (in photo at left).

With Pharell Williams’ worldwide hit, “Happy,” playing in the background, George Nimeh, chief digital officer at Kurier in Austria, shows the faces of the Guardian‘s Alan Rusbridger, Axel Springer’s Matthias Döpfner et al. “All those guys are happy these days on their digital journey. But one face I cannot find smiling lately is Arthur Sulzberger since his company’s Innovation Report was leaked. I read it every day now. If The New York Times, with such an incredible brand and great content, is struggling, man, what are we (small publishers) in for?”

Quite simply, Nimeh, says, “If you don’t start thinking about your digital journey every day, you are in deep trouble.”

The trouble, he says, with most traditional newspaper publishers, particularly smaller publishers, is that in today’s rapidly changing publishing ecosystem they are ill-equipped to “pivot” and change. “Although we often say that small and nimble is better, most of us are about as nimble as a big cargo ship.”

Thus small publishers must master the art of partnering and sharing, Nimeh and the other panelists agree: partnering with pure players and with technology providers to test new products and intiatives, and sharing with content providers and audiences.

“Through our partnerships, we can spend less money by using revenue sharing, etc., to test the waters. Then we assess if it works, if we should invest more, consider bringing something in-house, continuing the partnership or getting out,” he says.

In managing its team, Nimeh says, Kurier has a “25/50/25 concept. We try to find that 25 percent of our team who really wants to make change, then pair them up with that 50 percent who can help them to make it happen, and try to figure out what to do with the rest.”

Ernst-Jan Pfauth is Publisher of De Correspondent, the groundbreaking crowdfunding news site in The Netherlands. He was formerly editor-in-chief of Internet at NRC Media.

As traditional publishers try to maximise their resources, publishing contributions from their readers becomes a near necessity.

After launching a campaign for funding in 2013, De Correspondent received half of its budget expectation in just eight days. Today it has more than 30,000 paying donors/members. The site carries no advertising.

“We wanted a publication that was totally focused on what readers want. We ignored advice to keep it short and snappy. We think online lends itself to in-depth reporting, without compromise.”

When the site went live (it is available on numerous mobile platforms) in September 2013, it had slightly more than 20,000 members. Today it has nearly 34,000 members, each paying 60 euros per year.

One of the keys, Pfauth says, has been getting developers and designers into the mix from the beginning. “This is my most important advice to you: Invite a designer and developer into your meetings and strategy discussions. They are just as much storytellers as journalists are.”

Its team of journalists is focused on very niche topics, such as conflict and development and education, but De Correspondent taps into its most treasured asset, its members, for content. “Journalists are conversation leaders; members are expert contributors.”

Dagsavisen Fremtiden … back to the future

Lysholm of Dagsavisen, a daily newspaper with a position in the Norwegian news media market comparable to that of the Guardian in the U.K., says the paper resuscitated a former newspaper brand, Fremtiden, which had been closed 13 years ago. “Its name, more or less, means back to the future. It is perfect for where we wanted to go: Expand in print and plan for the digital future.”

After years of declining revenues, the company moved back into black figures in 2012 and 2013.

At the heart of its concept was transforming a single national and international newsroom into many local newsrooms. “We moved into markets where we were historically not strong,” he says. “We wanted to build a culture whereby our costs were that of a weekly, but our income was that of a daily.”

That meant maximising content and resources. In most of its local newsrooms, there is a staff of four or five, all of whom write, take photos, blog, tweet, make coffee for visitors, even sell subscriptions.

Key to its success is leveraging local content with local advertisers. So far, revenue is up 10 percent and after focusing on maximising print content and revenues, it will now turn its attention to digital, he says.