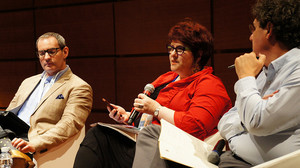 Their discussion followed the release of the World Editors Forum‘s 2014 Trends in Newsrooms report which tracked trends in social media verification. It came after publication earlier this year of the Verification Handbook by a global collaboration assembled by the European Journalism Centre and including the Poynter Institute in the United States.

Poynter’s point man on that front is Craig Silverman, founder and editor of the institute’s Regret the Error website and director of content and product strategy for Spundge. He summarised some of the handbooks’s key recommendations.

Chief of these is to verify source and content independently.

Silverman said working the source requires basically the same process journalists have always used — talking to them. He notes a difference, however, is that instead of just calling someone up or visiting them at home, tracking down a source today often requires unmasking digital personas and communicating through social media. Still, without an authentic source, it’s nearly impossible to trust authentic content.

• GoogleMaps to confirm location and setting.

• Wolfram|Alpha and other weather information sites to confirm the date and time.

• EXIF readers that can extract metadata embedded in photographs, including perhaps even GPS coordinates.

• Reverse Google Image Search to see if the same content has already appeared on the web in different forms at earlier times, posted by different users.

Silverman stresses that implementing such tools is part of establishing a culture of verification in the newsroom that is essential to protect the news organisation’s brand. It takes only one serious error, falling for one Internet hoax, to damage something that has taken many decades to build up.

Julie Posetti, research fellow at the World Association of Newspapers and News Publishers (WAN-IFRA) and a journalism lecturer at the University of Wollongong in Australia, reinforces both the differentiation and brand-protection values of verification based on results from her research into early journalistic adopters of social media.

She shared her five best verification practices garnered from her research:

Posetti also said that journalists using social media needed to be alert to the phenomenon of ‘astro-turfing’ the process of of spreading fake information, targeting journalists with an intension to redirect or mislead them.

While Posetti and Silverman also noted that verification skills are also an increasingly significant differentiation for professional journalists, as compared to everyone else producing editorial content today.

Anton Harber, the Caxton Professor of Journalism at the University of the Witwatersrand in South Africa, said the importance of verification is not to keep incorrect information from getting into the public debate but also of preventing people from manipulating the debate with abuse of facts and figures.

That particular concern is the impetus behind Africa Check, which operates out of Harber’s university.

Africa Check tests claims made by public figures around the continent using journalistic skills and evidence drawn from the latest online tools, readers, public sources and experts, sorting out fact from fiction and publishing results online — that last comes from its website. The pilot project was devised by AFP Foundation and, according to Harber, is intended to expand to other locations in Africa.

And while Africa Check has journalistic roots, Harber stresses that it’s ultimate goal as far as he is concerned goes beyond just media. The aim is promoting a culture of accuracy and verification throughout the country, throughout society, he said.

It also makes for a good training environment for his journalism students, who Harber says all have to do some work in Africa Check as part of their studies.

Harber called journalists “the essential tool to verification and accuracy” and sees a need for professional journalists to “get a more complex, sophisticated view of facts and accuracy” than he feels they tend to demonstrate today.

He also pointed to the chastening effect of Africa Check on some South African politicians, who have reported a heightened focus on the defensibility of campaign claims to avoid being caught out.