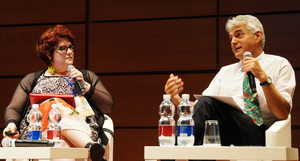 “It’s an opportunity to ensure there is follow up to bring to book those who attack and murder reporters”,  Berger told WAN-IFRA Research Fellow Julie Posetti during an interview staged as part of the conference. “Journalists are increasingly being targetted and killed with impunity worldwide”, he said.

Between 2007-2012, UNESCO’s Director-General condemned the killings of 430 journalists and asked UNESCO Member States to investigate the cases and produce a report. Only 42% responded to this request and there were convictions in just seven out of 430 cases.

While many newsrooms are currently focused on managing the surveillance threat in the post-Snowden era, “The biggest threat journalists face globally is being killed for doing their job,” Posetti said during the World Editors Forum interview.

Berger and Posetti both encouraged news media to get more proactive about spotlighting and following up on such crimes, which are powerful stories, regardless of their proximity.

It is “fairly easy to report when a journalist is killed,” Berger said, “but the real story is this impunity question, the killers getting away scot free. That requires more reporting and investigation – or at least nominating a reporter in the newsroom to monitor the issue.”

Berger argued that major spending is not required to increase coverage in this way. “On the other hand, if there is no coverage, the human cost is going to increase because every time a reporter or a blogger is killed and nothing happens, the risk to all journalists increases,” he stated.

“Local journalists who do local stories are the biggest victims of killings,” he note, adding that newspaper journalists represent 40% of murdered journalists – the largest of any media sector.

Berger also addressed concerns editors put to him in response to calls for their newsrooms to report the killing of journalists and, especially, cases of impunity. “Some say they don’t want to give journalists special treatment – to pay more attention to journalists than regular people”, Berger told Posetti. “Others consider it navel-gazing, or of little interest to their audiences”, he said, summarising the objections he hears as:

But Berger doesn’t accept these justifications. “I think they diminish the significance of journalists to society,” he argued. “When a journalist is killed with impunity, it intimidates other journalists, causing a chilling effect, and society more broadly draws the same lesson.” Berger counters editors’ objections to reporting impunity cases as follows:

1. All murders are unconscionable; the killing of a journalist leaves an information gap and enlarges this by stimulating self-censorship

2. Don’t depend only on others to defend the right for your profession to perform its public function without fear.

3. Editorial decision-making on coverage remains completely in your hands

4. When journalists are killed, it is the culprits who have made media into a story

5. There is ample important coverage to be done about safety, without any need to invent stories, nor resort to hype.

6. In a global world, your nationals can be, and are, killed abroad. And any killing in a far off country deprives your citizens of information. Journalists, your counterparts, in frontline countries rely on your coverage of the price they pay for speaking truth to power

7. People do care about those who keep them informed, particularly when a reporter loses his or her life in the line of duty.

So how should editors respond to the killing of journalists with impunity? Berger cited sustained coverage of journalist jailings and killings by Italy’s La Stampa and Finland’s Ilta Sanomat, which produced favourable reader responses, as examples for others to follow.

Berger’s suggestions for editors to get more involved include:

Recognising the importance of this campaign, the World Editors Forum is encouraging editors to collaborate on coverage of impunity cases globally in the lead up to November 2nd.