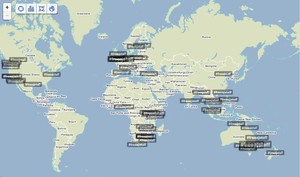 The Al Jazeera English journalists have been sentenced to 7-10 years on terrorism charges. “We will protest this decision in the strongest possible terms”, Kilman vowed.

Peter Greste and Mohamed Fahmy have been sentenced to 7 years behind bars, while Baher Mohamed has was given an additional 3 years, taking his sentence to 10 years, for possession of ammunition at the time of his arrest – he had a spent bullet that he had picked up during a protest.

The six other journalists tried in absentia have been sentenced to 10 years.

Another Al Jazeera Arabic reporter, Abdullah Elshamy, was released from jail in Egypt last week on medical grounds after a five month hunger strike. He was held without charge for 10 months.

Australia’s Prime Minister Tony Abbott has told a media conference that Peter Greste was only doing his job. “As an Australian journalist Peter Greste would not have been taking sides, only reporting on the events before him. He would have no interest in promoting the Muslim Brotherhood only reporting on the events of the day because that’s what Australian journalists do”, he said.

Abbott’s condemnation has been echoed by Greste’s union, the Media Entertainment and Arts Alliance, which has issued a statement demanding that “…the Egyptian authorities urgently intervene to free the three journalists who have been detained for simply doing their jobs”.

Al Jazeera English managing director Al Anstey said the verdicts defied “logic, sense, and any semblance of justice”. Meanwhile, Al Jazeera has welcomed the social media storm that errupted in response to the judgement, with the #FreeAJStaff hashtag trending globally on Twitter and urged the international commuity to continue protesting.

We are not going to stop till they are free #FreeAJStaff

84 people are talking about this