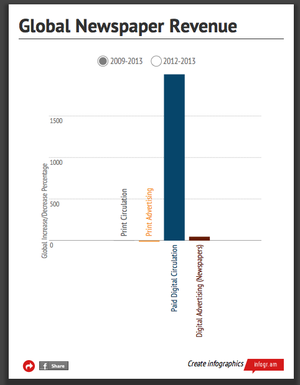 (Note: A larger, interactive version of the graphic shown at the left is available here.)

“Unless we crack the revenue issue, and provide sufficient funds so that newspapers can fulfill their societal role, democracy will inevitably be weakened,” WAN-IFRA Secretary General Larry Kilman tells the 66th World Newspaper Congress in Torino.

“The role that newspapers play in society cannot be underestimated, and has never been more crucial,” he says. “If newspaper companies cannot produce sufficient revenues from digital, if they cannot produce exciting, engaging offerings for both readers and advertisers, they are destined to offer mediocre products with nothing to differentiate them from the mass of faux news. Finding the sustainable business models for digital news media is not only important for your businesses, but for the future health of debate in democratic society.”

“There is growing understanding by the public that you get what you pay for, and an increasing willingness to pay for newspaper content on digital platforms,” says Kilman. “With all the free offerings out there, people are still willing to pay for news that is professionally written and edited, that is independent, entertaining and engaging. In short – what newspapers have offered for 400 years, and continue to offer, on emerging and existing platforms, no matter how it is delivered.”

Newspapers have begun working to increase these measures of engagement, and are doing so in a variety of ways, the survey found:

“While there is much to be done, the good news is, there is evidence that progress is being made,” says Kilman. “And it is essential for our industry to continue to come together to exchange ideas, learn what others are doing, find inspiration about what can be done so, ultimately, we can continue to provide the accurate and credible news and information that citizens need, and have long come to expect from us, to make informed decisions in democratic society.

“This is the ultimate goal, and the challenge,” he says. “Your successes – and your failures – will not only have an impact on your businesses today, but are also likely to have a profound impact on your children, on the shape of society in the future.”