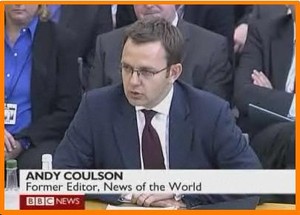 “All the journalists in the dock are distinguished. There was no need for hacking. Their achievements now count for nothing”, Mr Justice Saunders told the court during sentencing, according to The Guardian.

Coulson faced a maximum two year sentence on charges of “conspiring to intercept voicemails”. The BBC reports that the News of the World’s former chief reporter Neville Thurlbeck and ex-news editor Greg Miskiw received six month sentences while another former reporter James Weatherup was given a four-month suspended sentence.

The Murdoch-controlled Sky News network reports that Coulson described “No obvious emotion” as the sentence was handed down at the Old Bailey.

Meanwhile, Glen Mulcaire, the private investigator hired by Miskiw to work for the paper who was tasked with ‘phone hacing’, received a six month sentence that was suspended for a year. According to The Guardian, in issuing Mulcaire’s sentence, Justice Saunders declared “Mr Mulcaire you are truly the lucky one”.

As Sky News reported, Mulcaire has already served a prison sentence, having first been convicted of phone hacking with NOTW royal reporter Clive Goodman in 2006.

While Weatherup and Mulcaire walked free from the court today, Coulson, Miskiw and Thurlbeck were taken down to cells below the court after sentencing. The Guardian reported that the three will initially be transferred to a high-security prison, home to terrorists and other ‘Category A’ prisoners, for processing before being moved to another facility.

Former News International head and News of the World Editor Rebekah Brooks was cleared of related charges last week, along with a number of other co-accused.

It is exactly three years to the day since The Guardian first broke the news that someone acting on behalf of the now defunct News of the World had hacked the phone messages of murdered schoolgirl Milly Dowler.