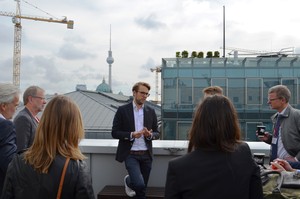 The tour kicked off with no less than Microsoft’s local Accelerator,  where the company greeted the group at its public café. The Accelerator helps early-stage startups to grow by offering a four-month programme. Of course not every company can just “sign up”; 10 companies are selected twice a year to work at the premises, receive training and mentoring, and make the right connections with investors. Microsoft itself chooses not to invest in the participating startups because “Innovation is the issue, not the money,” says Marius Sewing, CEO-in-Residence (see picture). But indeed the big name helps: Microsoft Ventures launched its first startup accelerator in Tel Aviv in 2012 and is now running vibrant hubs in Bangalore, Beijing, Berlin, London, Paris and Seattle.

We moved from the accelerator to one of its successful seeds: Pinio. Already running on a closed beta version, Pinio is a micro-video platform for exchanging opinions online. Think Medium, Quora and TED, it features a simple interface and clever design. With 30-second-long black-and-white videos, they have ambitious goals to end the domination of text on online platforms. The company will launch a global campaign this autumn to encourage 500 influential voices to share their views on Pinio. In 2012 Pinio got Chancellor Angela Merkel on board so it should not take long until other big names join. And Twitter’s decision to finally open video integration to everyone could be the definitive push for Pinio to have a shot as “the micro-video social platform”.

Events room at Rainmaking LoftNestled in the middle of the Berlin RainMaking Loft is a 1000-square-metre co-working space, events venue, bar and home of the well- established startup accelerator Startupbootcamp Berlin. Through a Twenties-style bar, the group entered a world of creativity, innovation and weekly joint breakfasts. More than a shared office, RainMaking Loft is an international partnership of entrepreneurs providing a collaborative and inspiring working environment to its tenants. Sensitive to a startup’s state of uncertainty, the Loft’s real estate business is built on flexibility,  offering one-month contracts.

The simple fact of being there is already an advantage for the startups, the access to a great network. On top of that they have well-known mentors visiting regularly from all over the world.

A highly networked world of digital publishers and startups

Die Welt´s centre of the newsroom: The EyeThe next stop is Axel Springer’s historic building, adjacent to the Berlin Wall. Inside we find the dazzling new digital-first newsroom of Die Welt. “Deadlines are every minute now; forget about deadlines,” says Dr. Marius Schneider, Die Welt’s editor-in-chief, reflecting the profound print-to-digital transformation sweeping through the newspaper. The newsroom may seemingly work at three speeds – digital, daily print and weekly print – but it dances to one rhythm: online. Die Welt introduced new subscription models for its digital offerings in December 2012 and became the first German national news website to launch a paid content model. In June, it reported more than 52,000 digital subscriptions.

“Ask your crowd for money to start your journalistic projects.” That’s the first thing that Sebastian Esser, director of Krautreporter, tells the visiting group. Inspired by the success of De Correspondent, the crowd-funded Dutch journalism startup, Esser’s team asked readers to pay 60 euros a year to help the startup launch its online magazine. The result: Krautreporter has exceeded its initial goal of 15,000 subscribers and plans to launch the magazine in October.  “It looked really bad for a long time, but it worked out in the end,” says Esser. And here’s the catch: the content on the site will be completely free to everyone, but they still managed to convince readers to pay. How? Not just through their belief that people would pay, but that they would be willing to pay long-form quality journalism. And they had a good barometer of this with overwhelming support from social media. For Esser the logic is clear: “give the product away and market the process, if people want to be part of that they will pay.”

Alhrichs talking to the groupDomenika Alhrichs, deputy editor-in-chief, opened the doors of the digital-only newsroom of ZEIT ONLINE. Its big sister, Die Zeit, is the leading German weekly newspaper that barely fits in the mailbox of its subscribers. So how do you transform such a big paper into an online publication? One of the first moves was to decouple the digital division from print and move it from Hamburg to Berlin to better cover Germany’s political epicenter. Another big step, says Alrichs, was to have its 60 editors working hand-in-hand with programmers and developers.

After two years working apart, she says the publisher has found a better formula. Every week the website publishes 10 articles from the print version – each newsroom chooses five. It should come as no surprise that print and digital have a shared audience of only 8 percent: mid 40-year-olds to mid-60s buy the paper while mid-20s to mid-40s prefer the online publication. The website has made strong efforts to be something different as its social media engagement and creative tools like this interactive graphic to track World Cup tweets are clear signs of innovation.

Meetrics headquartersZEIT ONLINE is one of seven news publishers working already with analytics specialist Meetrics. It is a major player in Europe with its technical solutions to help increase the quality and impact of advertising campaigns and online editorial content. From its first “homeoffices” to the Haus des Reisens at Alexanderplatz, the building that was once the DDR´s state travel bureau is now home to Meetrics headquarters. Founded in 2010, this startup has grown quickly, now operating four offices across the world. With its real-time time analysis, Meetrics is proving to be good ally of online newsrooms. Meetrics News Attention Monitor, its dedicated publisher product, shows instantly which topics enjoy the greatest popularity among readers.

Our final stop was at Celera One. Although maybe not yet a household name, the high-tech startup is responsible for managing the paid content of Axel Springer´s Bild.de and Welt.de. It is a “paywall-specialist” with highly flexible and sophisticated offerings. For example, Celera One can adjust the offer to potential subscribers depending on their access: at a university you will get a lower price than at a financial institution. At an old factory converted into a multifunctional space, dining, networking and watching a World Cup match, the group said goodbye to the highly networked world of digital publishers and startups of Berlin.

Study Tours are organised by WAN-IFRA throughout the year to get to know media outlets, startups and other innovative organisations in their native environment. Check out the website for next dates.