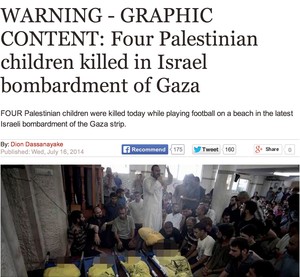 Social media platforms are the Wild West of publication. Journalists and traditional news publishers are no longer the primary information ‘gatekeepers’ of public discourse; neither are they able to impose their professional publication standards and ethics on social media users and bloggers. Instead, they are co-creators of content in the social media sphere.

Debates about ethics, standards, taste, impacts and appropriateness of mainstream media’s visual representation of the attacks on Gaza and MH17 now take place in the public domain, and they involve creators of User Generated Content (UGC), along with journalists and their ‘audiences’.

The Sydney Morning Herald’s Tim Elliott has reported on the creeping effect of graphic images posted on social media platforms, citing examples in Time Magazine, the Weekend Australian and The New York Times.

In response to the flood of graphic images of injured and dead Gazans on social media accounts, and evidence of crossover into mainstream media publications, a Telegraph columnist asked: “Can everyone please stop posting pictures of dead Palestinian children all over the internet?” A plea echoed by Sharon Moore in The Guardian, who wrote: “Sharing pictures of corpses on social media isn’t the way to bring a ceasefire. I don’t need you to tweet any more images of dead children – spreading them only devalues the currency of shared humanity.”

Journalists can usefully engage in these debates in social media spaces and, in so doing, they may influence other users. But they can’t control what’s shared, nor demand compliance with professional codes of conduct.

Conversely, as participants in social media communities and realtime witness bearers, journalists and editors are not immune from the effects of exposure to the flood of graphic and traumatising online images associated with horrifying stories like the attacks on Gaza and flight MH17. (Note: This is the most shocking image I have seen on Twitter in the past month. Please be warned, it depicts a Palestinian toddler with massive head injuries and I am linking to it only to demonstrate the effect of unfiltered online publication). 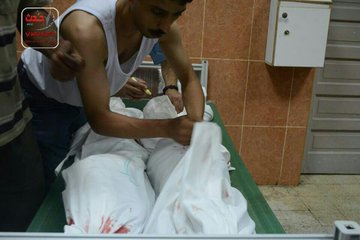 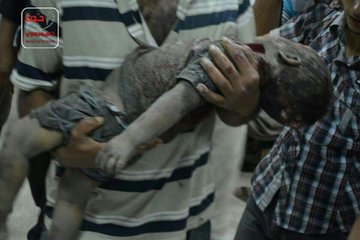 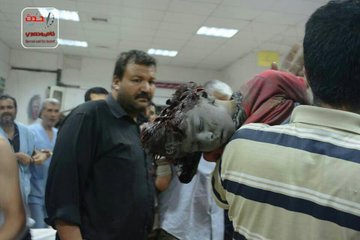 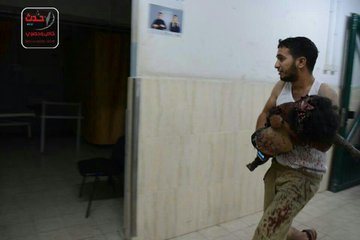 233 people are talking about this

The onslaught can have traumatising impacts – impacts familiar to foreign correspondents, war reporters, photographers, camera operators and photo editors. Now, everyone’s a photo editor. And the effect of such relentless exposure to pictures of carnage can involve desensitisation, which may mean that it takes increasingly graphic images to cause a strong reaction in a journalist, and by logical extension, mainstream media consumers. This means that we are now a cycle where as journalists, photo-editors and editors we are increasingly exposed to graphic images of war, disaster and human suffering and we are co-producing their distribution with audiences, magnifying the impact.

The key effects of this phenomenon could be identified as:

Collectively, these effects may help explain why we are seeing increasingly graphic images creeping into mainstream media.

Which leads me to suggest that, as with similar debates regarding the law and social media, journalists and civil society need to engage with these issues as members of online communities, in an effort to stimulate awareness of potential impacts and ethical considerations.

Additionally, these debates need to occur in newsrooms, through open reflective practice that acknowledges all of the issues discussed here. That might be done through news conferences, informal online chats or in the context of formal training.

This image of man with a missing limb appeared in my Twitter feed during social media training I conducted at The Age last year, in the aftermath of the Boston Bombings.

It shocked me at the time and I led a discussion with course participants about the implications of uncurated and unmediated war and disaster photography shared on social media. We concluded that we wouldn’t have published the image in a newspaper. But after what I’ve witnessed in my feeds from Gaza and Ukraine in the past week, and what I’ve seen cross over onto news sites, this image no longer seems so shocking and I wonder if it would now find its way, uncropped, onto frontpages of mainstream newspapers and their websites.

But while I think it’s important to reflect on our normative and professional valuesin reference to these debates, we need to be mindful of cultural and freedom of expression issues. I don’t want the devastating visual record of war to be sanitized – graphic images have been historically important in war coverage and Western media sensitivity to shocking images is not universal. As Australian Broadcasting Corporation (ABC) foreign correspondent Zoe Daniel pointed out during a discussion on this theme around one of my Facebook posts:

“Sensitivity to victims and families must be paramount, however over-sanitising can betray the truth of a situation. It’s also worth noting that in other countries there is next to zero sensitivity around this – in Asia graphic photos of death are everywhere on TV and in print. It’s too much. We’re at the other end of the scale where sometimes I think the audience is artificially protected from what’s actually happened. It’s a very fine balance.”

Social media means anyone can publish graphic images of war and human suffering, and there is evidence that this reality is having an impact on mainstream news publishing standards. But it’s important to remember that we all still have the choice to look away.

Note: I offered some of these comments, in the first instance, to Tim Elliott at The Sydney Morning Herald who wrote this thoughtful piece on the issues considered in this post.