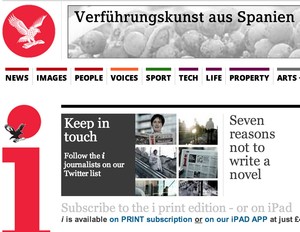 The London Evening Standard was re-launched as a giveaway in 2009, shortly after the Lebedevs bought the struggling title for £1. They added The Independent and the Independent on Sunday in 2010, before launching the cut-price liftout-style daily ‘i’ the same year. And this week, they added the digital only property i100 – a reader controlled project based on social sharing and ‘up-voting’.

‘i’ now outsells The Guardian while The Evening Standard has a circulation of 1 million and it has turned the corner into profit. Further, The Independent’s losses were slashed last year by £5million.

So, is moving one subsidiary to ‘free and cheap’, a sustainable model for propping up heavier titles, like The Independent, as per the Lebedev approach?

News industry analyst Ken Doctor – author of Newsonomics – told the World Editors Forum that in addition to sharp and effective cost-cutting, “Lebedev’s been smart to segment the market, among his several publications, from free to cheap to fuller price. Among them all, he can sell advertising, using a single set of sales people and ad tech, and that, too, is a lesson of consolidation and leverage; it works in print as well as in digital.”

“There is lots of print advertising still able to be sold,” Doctor said. “There will survivors, even modest winners, in that arena, fighting over still sizeable scraps.”

However, Doctor issued some business advice for the the Lebedevs, who began actively seeking a buyer for The Independent in January. “Their plan will need to include a greater investment in digital over time, if a longer-term digital/print strategy can be built to sustain [their] enterprises,” Doctor said, in an interview conducted prior to this week’s launch of i100.

And what does Doctor think about the Lebedev’s investment in hyperlocal TV, leveraging the newsrooms of the Evening Standard and The Independent for content? He acknowledges the importance of recognising the connection between TV and digital video “…though the expense of producing it for TV may overwhelm the synergies he’d like to yield.” And it’s too early in the London Live experiment to know whether it’s a likely success story, according to Doctor. “[They] may be better off taking the VGTV route of web TV that Schibsted is having great audience success with; but that will take longer to monetize,” he said.