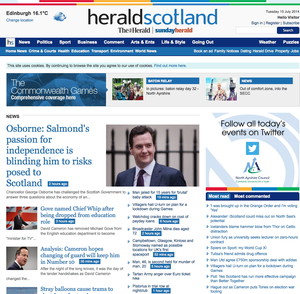 According to PressGazette, the Herald in Glasgow says it passed the 10,000 mark three years after launching its paywall.

The paper said its overall paid-for readership had moved past that figure in the year to June 2014, attributing the success to the “digital only” and “combination digital and print” packages on offer.

Heraldscotland.com allows readers to access three full articles without registering and then another three after registering without payment. At launch, users were allowed to read ten stories without paying a fee.

Subscribers pay £1 for the first month’s access and then £2.99 after that for web-only access or £5.99 a month for web, mobile and tablet use. Print subscribers also get digital access included.

Separately, writing for InPublishing Magazine, Steve Dyson reported that Keith Harrison, editor of the Wolverhampton Express & Star, seems to be giving serious thought to raising a metered paywall. in an interview, Harrison said he had visited the New York Times, the Minneapolis Star Tribune and the Deseret News last year, and was impressed by the success of the metered walls at those U.S. papers.

“My personal view is that a metered paywall is likely to be the most successful model for newspaper websites,” he told Dyson.

“But to do that, we’ve got to have a digital offering that’s indispensable, and an audience regular and consistent enough to pay for it. Critical is bringing people on board, and getting them hooked to pay something,” Harrison said. Other important factors are the number of free stories, and of course pricing.

In addition to his role in Wolverhampton, Harrison is editorial director of the Midland News Association (MNA), covering the Shropshire Star and a string of weeklies.