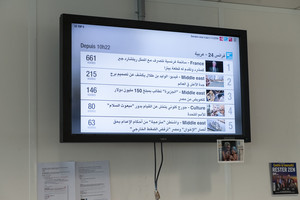 So, how do you measure audience engagement and what are the most effective metrics to do so? The role of analytics in news production remains contentious, but having a clear understanding of what readers consume and how they consume it helps newsrooms to better target their content, and to deliver it more efficiently in a digital world.

In the continuing World Editors Forum blog series on the Trends in Newsrooms 2014 report, Federica Cherubini reports on analytics and their role in the newsroom.

Until recently, pageviews and unique visits were the two undisputed metrics for measuring digital audiences – the recognised currency for showing value to advertisers. Pageviews (or page impressions), together with unique visitor statistics, tell us the number of times users load and visit one web page. They reflect a quantitative approach to measuring the traffic to a website and its performance.

But earlier this year, a debate arose, challenging the accepted value of these metrics in favour of qualitative metrics that measure attention and engagement: how interested the reader is in the page, and how long she or he remains on it. The debate was triggered by an article on Time.com by Tony Haile, CEO of real-time web analytics company Chartbeat. Carrying the provocative headline “What you think you know about the web is wrong”, the piece argued that there are myths about what readers click on, read and share – starting with debunking the myth that users read what they click on – and that click-through rates no longer reflect reality.

Consumers’ attention is a scarce resource; every publisher is competing with everything everywhere when it comes to attracting news consumers’ attention. New methods allow the capturing of in-depth data about what Haile describes as a “second-by-second, pixel-by-pixel view of user behaviour.” In what Haile calls the “attention web” what matters is no longer what links users click on but what they do once they click it and how they engage with it. New ways to measure this include tracking mouse movements, scroll depths and time spent on a page. However, measuring time spent is problematic as some services showing the amount of time spent on a page don’t encounter the fact that some users leave tabs open on the desk without actually reading the item.

Dissatisfaction with traditional metrics has prompted some companies to come up with their own new measurements. Chartbeat, Medium, YouTube and Upworthy have all introduced their own branded metrics.

The UK newspaper industry recently announced they are also working on reviewing “current metrics for audience measurement in a bid to establish a system that tracks readership across various digital platforms”.

Not everyone agrees that pageviews are obsolete, however. News Corp’s Senior Vice President Strategy, Raju Narisetti, believes “vanity metrics”, such as pageviews, are still important. “I’m actually glad that the news industry is having a debate about what are the right metrics,” he told the World Editors Forum. “The problem with these debates tends to be that they are disconnected from the reality of the business of our industry. The reason why pageviews and unique visitors and visits matter is because they are a proxy for delivering a certain number of advertisements to our audiences, and that’s the easy way to measure that. And when our industry is still 67 percent dependent on advertising, the metrics that matter to advertisers also are the metrics that matter to the newsrooms.”

Newsroom resistance: the need for a cultural change

A data-driven content approach encounter some resistance in the newsroom though, with journalists fearing that the daily use of audience analytics will undermine the quality of their work. As Narisetti argues, the objections in print-centric newsrooms to incorporating analytics into day-to-day workflow comes from the fact that audience data has long been considered a temptation to editors to pander to audiences and orient stories towards click-bait.

In the traditional print world, despite the prevalence of “reader surveys,” it was difficult to ascertain whether anybody was actually reading specific content. And editors traditionally viewed their responsibilities as including deciding on behalf of readers what was important. Narisetti says it’s often difficult for those editors to suddenly accept that there is a lot of data and that the data says something about engagement, about what readers care about, what readers don’t care about, and to accept that you have to be able to use a mix of this data and your own news judgement to determine content priorities.

To rebut this resistance inside the newsrooms, it’s important that editors understand that data doesn’t fully replace professional news judgement, Narisetti contends. “There is a false cause-effect relationship that newsrooms build up [in which it is argued] that if you follow audience data then you’re chasing traffic. That’s why editors are there, to make sure that we don’t do all those things, right? That’s not the problem of the data, that’s a problem of how you manage your newsroom,” he told the World Editors Forum.

Narisetti’s overall argument is that can help drive cultural change. “However, that’s a work in progress that will take a long time, and despite the industry feeling threatened by the current times, most newsrooms still are very comfortable. It’s time to get them out of their comfort zone. And using data to do that, I think it’s a good way.”

‘Turn on the light’

Andrea Iannuzzi, Executive Editor of National Content for the daily newspaper network at Gruppo Espresso, vouched for the value of analytics during a presentation at the International Journalism Festival in Perugia last May.

“If we find ourselves in a dark room we have three options: moving very slowly, trying not to smash into something; moving very fast given the certainty that we will crash into something; or turning on the light,” Iannuzzi explained. “Metrics are the light: a torch or a lighthouse, depending on their level of accuracy and depth and on our ability to read them and interpret them without becoming subjugated. Today a journalist – and more widely anybody who produces content – who refuses to use data analytics to assess in real time the level of interaction he or she is having with the readers is someone who has decided not to turn on the light and stay in the dark room.”

So which are the right metrics for newsrooms to focus on if they want to emerge from the “dark room”? Iannuzzi explained that the answer very much depends on whom you consider as stakeholders. “For marketers and advertisers, pageviews still have value because it’s a standard metric, accepted by everybody. For the journalists, and more broadly the newsrooms, the most valuable metrics are without doubt those based on attention, the time that a reader spends reading and thinking about the content. We know there are ways other than just ‘time spent’ to verify the level of attention, such as the interaction with the content, scrolling, touch of the mouse – but when it comes to the readers, trust is the metric,” Iannizzi said. “We shouldn’t discuss dismissing pageviews, but rather combining them with other metrics.”

Note: You can read this article in full, in the report Trends in Newsrooms 2014, edited by Julie Posetti, available here (free to WEF and WAN-IFRA members). In part one of this Trends in Newsrooms blog series, we provided an overview of the top 10 newsrooms trends of 2014, in part 2, we profiled trend 1: the urgent need to shield journalism in the Age of Surveillance, while in part 3 we addressed trend 2: the rebooting of mobile strategy. In the fourth installment of the blog series Julie Posetti and Craig Silverman reported on trend 3: Back to basics with social media verification. You can continue the conversation on Twitter, using the #TrendsInNewsrooms hashtag.