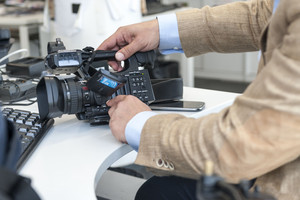 Building a capacity for video news online remains an exercise in faith. Despite the fact that videos aren’t directly producing revenue, they still have an important role to play in a news organisation’s business strategy because they now act as the “point of entry” for many readers and viewers. For now, experts advise publishers to work out how to do video well and think about revenue later.

Online-video experts suggest that the first step in any video strategy should be identifying the kind of news that is suited to online video on your site. Stories that are human, about an individual person’s or community’s experiences, and stories that are local – as well as breaking news that holds the promise of good visuals – lend themselves to video (see the Washington Post’s ‘First and 17’, about a rookie footballer). Video should complement text and open up new, creative opportunities, rather than simply repurposing text stories and following the traditional inverted pyramid style.

Daniel Gawloski, of The Seattle Times, has spoken about identifying the aspect of the story that video can most effectively communicate: “I’m looking for something that carries emotion… what I don’t want is a video that tells the same story as the text. I want a video that helps you understand the story in a way that text doesn’t.” He was speaking as part of a panel discussion in April 2014 to launch the Tow Center’s multimedia report Video Now.

It’s also important to develop your own online approach, rather than just mimicking broadcast TV, according to practitioners and experts who spoke to the World Editors Forum for this report. Television is usually targeted at mass audiences and designed to appeal to everyone, whereas newspapers tend to have a more specific audience and so can be more distinctive in tone. Embrace this, and develop your own style, they say. Some of the Video Now panellists spoke about the different approaches at their publications:

The long and short of it

Getting length right is vital for finding and retaining online viewers, who are increasingly using mobile devices to access news websites. Marie-Noelle Valles, Head of Video at AFP, echoed the prevailing wisdom that videos should be short to appeal to those on the move. But she also told WEF that while short might be the way to attract viewers initially, this does not mean long-format should be ignored: “It doesn’t mean these people will not return to longer formats, because they remain interesting and relevant, but the point of entry is a short, agile, quick video.”

It appears that there is no ‘magic length’ that people like: it’s true that short, funny clips are more likely to go viral, but in-depth documentaries should not be ignored. Some of the organisations interviewed for the Tow report talked about the value of ‘letting it run long’.

•   Frontline makes documentaries for the US TV network PBS. Their online audience is exploding, with 1.7 million unique visitors a month from all devices. And their tablet users watch about three times longer than desktop users, who stay on average between two and seven minutes, according to Frontline’s deputy executive producer, Raney Aronson-Rath.

•   Vice has 4.5 million non-paying subscribers who get regular updates from Vice’s YouTube channel, and it boasts some remarkable engagement statistics. One of its most popular videos, ‘Suicide Forest in Japan’, has almost 8 million views, 83,000 likes and 2,000 dislikes. When Vice dipped into shorter, “viral” clips, there was a backlash in reader comments. Mojica says his customers complained the viral videos were “bullshit”.

•   The website of MediaStorm, a film production studio based in New York, is seeing thousands of views a day of documentaries it made several years ago. Founder Brian Storm told Tow, “…yeah it gets a lot of attention when it first comes out, but … years later. . .four or five thousand people a day are watching a story.” One of the main recommendations of the Tow report is to produce “evergreen” work that users can come back to time and time again.

Storm says, “There’s two things that are really successful in the space that we’re in right now: being really, really funny — cats spinning on a fan — or the highest-quality thing that you’ve ever done on Darfur. Those are things that people tweet, those are the things people post on Facebook, right? The stuff in the middle, the volume, is noise.”

Short videos may be the most effective way of attracting users and increasing traffic on other parts of the news website. But in terms of retaining an audience, increasing prestige and developing a video revenue stream, high-quality long-form video has an important role to play. The consensus seems to be that editors need to decide the degree to which video should be used simply as a “point of entry” or as a more developed, content-rich part of the website.

Note: You can read this article in full, including a section on video tips from experts, in the report Trends in Newsrooms 2014. The report, edited by Julie Posetti, is available here (free to WEF and WAN-IFRA members). In part one of this Trends in Newsrooms blog series, we provided an overview of the top 10 newsrooms trends of 2014, in part 2, we profiled trend 1: the urgent need to shield journalism in the Age of Surveillance. In part 3 we addressed trend 2: the rebooting of mobile strategy. In the fourth installment of the blog series on trend 3: Back to basics with social media verification. The post on Trend 4: analytics – when data drives the newsroom is here.

Please continue the conversation on Twitter, using the #TrendsInNewsrooms hashtag.