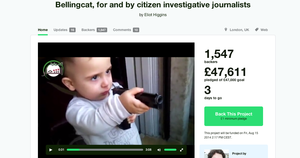 Using open source journalism, Bellingcat aims to report on those stories that are overlooked or underreported by traditional media. Funded by a Kickstarter campaign, which closes on 15 August, Bellingcat was born out of a desire to connect projects and reporters – including a team of heavyweight journalists such as Jonathan Krohn, Peter Jukes and Phillip Smyth.

“There are great projects but people aren’t engaging with them. I’m really keen on Bellingcat to get people to engage with them because I think they’re worth it,” Higgins told the World Editors Forum.

“Also a lot of big projects would work very well together, yet they don’t know about each other so it [Bellingcat] is also about really pulling them together to get them to one place,” he said.

Higgins, the founder of the Brown Moses blog, acclaimed for its monitoring and investigations into Syrian weapons, sees Bellingcat as sharing common DNA with his first site; open source information. “I think the one thing that I’m trying to do, at the very minimum, is to make people become literate in this kind of work,” he said.

“I think with open source information; it’s out there but people don’t know how to use it, or they don’t even know to use it,” he said.

This open source information that helped Higgins to break stories about the wide usage of barrel bombs, cluster bombs and MANPADs in Syria, is now being used to investigate stories in Gaza, Russia and Ukraine for Bellingcat. With the help of dashboard videos from Russian and Ukrainian citizens, sightings of the Russian Buk MH17 launcher have been uncovered and reported on the site.

“It’s kind of just understanding how technology is being used by people in their day-to-day lives. People don’t realize how many dashboard videos there are from Russia and Ukraine and how they can be used… to get a view from the ground. So, it’s that thinking, how we piece all different pieces of information together.”

The website will cover stories that are underreported and will also provide tools and “how-to” articles for journalists. “I get a lot of interest from journalists, for example if I write about verification techniques,” Higgins said. “I really want to give journalists, at the very least, a chance to read about how to do it.”

The Kickstarter campaign, which has been running since early July, has already topped the proposed 47,000 pounds (approximately 58,775 euros). Click here for more information or to contribute.