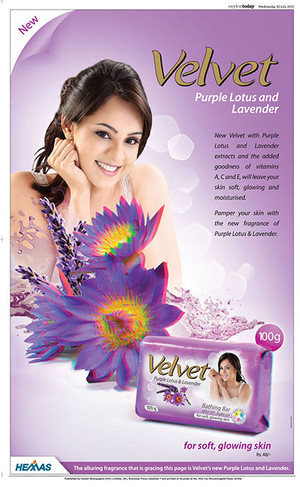 In late July, Ceylon Today published a 3D advertisement that crossed into a fourth dimension with the addition of a fragrance scent. Wijeyarathne will be the keynote speaker at WAN-IFRA’s new World Printers Forum conference, which makes its debut during this year’s World Publishing Expo in Amsterdam on 15-16 October. Here, from our recent email interview with him, Wijeyarathne answers our questions about the 4D edition.

How did idea for the 4D experience come about?

We at Ceylon Today refuse to accept the global assumption that serious newspapers are also boring. We want to give our readers something new and exciting all the time. With Ceylon Today, our readers never know what they will find when they pick up our newspaper.

Our pioneering newspaper introduced the world’s first-ever 4D experience in a newspaper in July to truly add something that would take our readers to new heights in reading pleasure.

This concept is simple but powerful. The most practical experience of 4D comes with 4D films. 4D film is a marketing term for an entertainment presentation system combining a 3D film with physical effects that occur in the theatre in synchronisation with the film. Effects simulated in a 4D film may include rain, wind, strobe lights, and vibration. Seats in 4D venues may vibrate or move a few inches during the presentations. Other common chair effects include air jets, water sprays, and leg and back ticklers. Hall effects may include smoke, rain, lightning, air bubbles, and special smells. But of course, we can’t do any of those through a newspaper.

But thinking along the same lines, Ceylon Today combined two of our previous inventive concepts: 3D print and fragrance, with this special 4D issue. The 3D image on the back page of the main section was given the fragrance of Purple Lotus and Lavender, gearing it to provide a 4D experience. Readers were provided with free 3D glasses.

How long did the process from idea to actual publication take? How complicated was this to do?

This idea was generated a few months back, but it took about three months to materialise. We had previous experience on 3D and adding fragrance. But this project required a few test runs to make sure the 3D image stands out and the fragrance is giving the right smell. Since we add the fragrances to the ink itself, many test runs were needed to figure out the right percentage of fragrance to be added. It cannot be harmful to the printing press, but strong enough to experience the fragrance without much effort.

Saranga Wijeyarathne, Director of Marketing, Ceylon Newspapers LimitedWhat has the response from readers and advertisers been like to 4D? Have you had much feedback?

Yes, the feedback was very encouraging. Prior to the day of the innovation an extensive pre awareness campaign was launched with in-house teaser ads, TV and Radio ads, SMS campaigns, posters, emails and social media. This has created curiosity and readers were waiting to see what it was. Even with a 40 percent increased print run, the paper sold out within a few hours. It created a major talking point on that day, since social media, websites, TV, radio, etc, started talking about the innovation.

Do you have plans to do another 4D experience in the near future?

There are a few requests for 4D ads and we are in the process of planning. More than repeating the same thing, we are continuously looking at trying out more and more new innovations in the future.

Your paper has received a number of awards, has this recognition in turn helped you in the marketplace with your advertisers? Have you found that awards also help to motivate your staff?

The most recent award won by Ceylon Today was becoming the “Emerging Brand of the Year” at the Global Brand Excellence Awards 2014 in Singapore. Mawbima and Ceylon Today have won more than 10 awards within three years. These include awards for Sri Lanka and also from other countries.

Winning an award helps us in numerous ways. When we apply for an award, while developing the entry kit we always revisit our processes. It helped us to identify things we have done well and also things we would have done differently.

Always, winning an award motivates the whole team since we believe and recognise it as a team effort. It is always better when we could make our success tangible. An award is a great way to do it.

Since we are a new newspaper company, awards boost the confidence level of readers and advertisers to buy both the paper and advertising space. Advertisers always look for a quality publication to associate with, and becoming an award winning publication will place us high in their mind recall.

We are always motivated when others recognise our good efforts. Awards will definitely positively spur us on to do more and more innovative stuff in future.

Interested in finding out more about Ceylon Newspapers’ innovative ideas in print? Saranga Wijeyarathne will be a keynote speaker at the World Printers Forum in Amsterdam on 15 and 16 October 2014, that takes place alongside World Publishing Expo 2014 will give both newspaper production professionals and suppliers a place to gather and exchange ideas, create standards and develop strategies for the future of print.