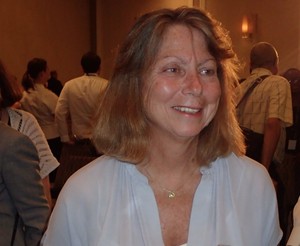 Ms Abramson, who is set to join Harvard University as a visiting lecturer in narrative non-fiction journalism, was asked to address the 400-strong gathering on the topic ‘Journalism in a 24/7, mobile, Twitter world’.

“Her three year tenure began and ended in headlines,” AEJMC President Prof. Paula Poindexter told the audience as she introduced Abramson to the stage.

In September 2011, Ms Abramson grabbed headlines for all the right reasons; she was the first woman in the paper’s history to hold the top editorial position. Then, shrouded in claims of gender pay inequality, The Times’ publisher Arthur O. Sulzberger Jr. announced in May that she had been fired because of “… an issue with management in the newsroom.”

After almost three years at the editorial helm of The Times, and with eight Pulitzer prizes to the paper’s name under her leadership, including one for the much-vaunted multimedia feature Snowfall, Ms Abramson was abruptly replaced by then Managing Editor Dean Baquet earlier this year. Baquet became the paper’s first African American editor.

As one of her first public speaking engagements since her dismissal, Ms Abramson’s AEJMC speech covered much terrain. Here’s my curation of the most quotable quotes from her keynote address in Montreal.

1. On NYT Now (her last big project as Executive Editor at The Times)

3. On the news consumers formerly known as ‘readers’

4. On finding an audience

8. On the Snowfall effect

9. On the elephant in the room:

50 years after the Civil Rights Act, 40 years after 2nd wave feminism, why is it so hard for minorities and women to get and keep, let alone keep, top jobs in news organisations