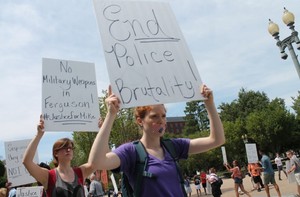 In the aftermath of the shooting, two journalists were taken into custody on Wednesday for what they claim were contrived or non-existent reasons. One of those arrested, The Washington Post’s Wesley Lowery, claims in a first-person account that he was approached by police while sat in a local McDonald’s perusing Twitter and charging his phone, and was arrested along with Ryan Reilly of The Huffington Post as they tried to leave:

“As they took me into custody, the officers slammed me into a soda machine, at one point setting off the Coke dispenser. They put plastic cuffs on me, then they led me out the door. I could see Ryan still talking to an officer. I said: “Ryan, tweet that they’re arresting me, tweet that they’re arresting me.” He didn’t have an opportunity, because he was arrested as well.” 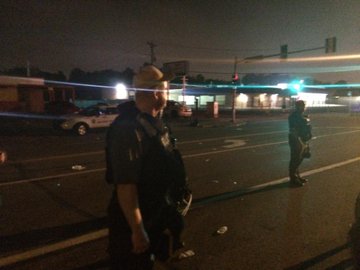 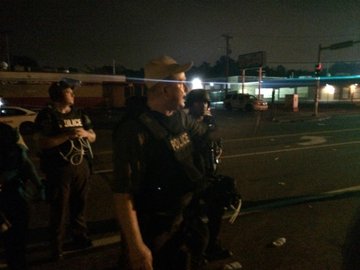 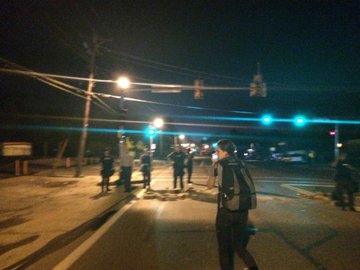 554 people are talking about this

In an open letter, a coalition of forty-eight media organisations has expressed its strong dissatisfaction with the way the journalists have been treated. Signatories to the message included a number of big corporate names such as The Huffington Post, VICE and Lowery’s bosses at The Washington Post, as well as NGOs and trade bodies like Reporters Without Borders and the Newspaper Association of America. The letter lambasts the police actions as “anathema to the First Amendment and to journalists everywhere”, and emphasises that “gathering news and recording police activities are not crimes”.

The US President has also weighed in, commenting publicly on the journalists’ constitutional rights. Deadline magazine reports that Barack Obama said “police should not be bullying or arresting journalists who are just trying to do their job and report to the American people what they see on the ground”.

POTUS: “Here in the United States police should not be arresting journalists who are trying to do their jobs.”

In addition, Attorney General Eric Holder said that “journalists must not be harassed or prevented from covering a story that needs to be told”, and although his statement pointedly does not go into further detail on the allegations of police mistreatment made by Lowery and Reilly, it is significant that the issue of press freedom has been acknowledged at the highest levels of the US government at the height of the crisis in Ferguson.

Another threat to press freedom in Ferguson appears to be the imposition of a curfew on the city, limiting movement after midnight. The New York Daily News is reporting that one of its journalists was held by police for a short while and had a gun pointed in her face for breaching this rule.

The fact that such treatment is occurring in a country with constitutionally enshrined protection for freedom of expression that protects the work of journalists is striking.

But also significant in the Ferguson story is the role of social media as the leading source of realtime information and audio-visual documentation of the crisis. Journalists are learning to work alongside the growing influence of the ordinary citizens who break news as it happens on social media, as realtime witnesses.

The traditional demarcation between professional journalist and citizen reporter is now substantially blurred: a video shot by local Democrat politician Antonio French has received over 250,000 views on Youtube, while his number of followers on Twitter has increased threefold in the space of five days. Even Twitter’s founder, Jack Dorsey, was tweeting from Ferguson. Significantly, the open letter referred to earlier cites legal precedents which uphold the rights of “not just journalists, but members of the public generally” to watch police officers on duty and collect information on their behaviour, a move which recognises the equal status of traditional journalists and those social media users sharing content live from the scene.

While the problem of censorship is obvious when traditional journalists are arrested and tear-gassed (as Al-Jazeera claims a group of its reporters was), the incidents in Missouri have also raised questions about social media censorship and net neutrality. Some users complained that on Twitter, #Ferguson was often not trending. Suggestions of censorship at Twitter HQ from some users, however, appear unfounded. TechCrunch’s Sarah Perez makes the essentially simple point that social media, unlike traditional media has no editorial function: story saliency is ascribed by computerised algorithms which are contingent not upon the whims of a human editor, but by a pre-designed melting pot of factors including location and the people you interact with on the site:

“People who didn’t see a #Ferguson hashtag may have had nothing but their own network of friends to blame. Or they may have been located somewhere that the hashtag wasn’t accelerating more quickly than the other hashtags that were being displayed to them. To be clearer: Twitter wouldn’t – and didn’t – actively censor or remove this trend.”

TIME’s collation of user-generated content when the violence flared last Wednesday is full of Vine videos and tweets, but the absence of content from social media monolith, Facebook, is conspicuous. A commentator at online tech journal PandoDaily claims this is because Facebook’s algorithms are generally set to “make us feel happy” and hence reward links to banal features enabling entertainment and procrastination more often than they boost news and analysis posts.

Higher levels of privacy on individual Facebook profiles, too, makes it harder relative to Twitter for end-users to share content with a mass audience, and Twitter also allows people to construct bespoke follower lists tailored to their interests – and hence end up reading only what they care about. Matthew Ingram at Gigaom says Twitter gives users a “rapid fire experience” of breaking news: he points out that information posted on Facebook is usually only visible to approved friends, while tweets can normally be viewed and shared quickly and repeatedly to anyone who seeks them. Yet another lesson for journalists from Ferguson, then, is that each social media service is different: the choice of platform to share content in real-time, as the folks in Ferguson did, does matter.