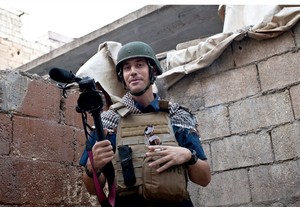 Almost every major news organisation around the world refrained from showing the video of the photo-journalist’s death at the hands of Islamic State.

In contrast, the Murdoch-owned New York Post was widely condemned for showing a photo of the moment just before Foley’s throat was slit in its print edition, under the headline “SAVAGES”.

The UK interest in the identity of the executioner, triggered by his clearly British accent,  prompted The Telegraph and The Guardian to release the audio of the video, while the Mail Online shows the video up to the point just before James Foley was executed.

A Tweet posted by a Guardian journalist on Tuesday evening

On social media, images and links to the full video were easy to find on Twitter and less scrupulous websites left the graphic video up for all to see. A Google video search produced a similar result; whilst YouTube quickly removed the initial video posting from Islamic State, it was reposted by many users. The constant reposting of links to such footage means that those who wish to view the video are easily able to do so, even if social media site moderators attempt to remove links as soon as they appear, as Twitter began doing. As well as removing Tweets which link to the video or to graphic photographs, Twitter was suspending the accounts of people sharing the video:

After an initial mass sharing of gruesome images, by well-meaning people wishing to raise awareness as much as by more sinister folk, the tide began to turn and the Twitter hashtag #ISISmediablackout trended as private individuals and high-profile figures alike have called for people curb the spreading of such material, and it was evident that moderators had stepped in.