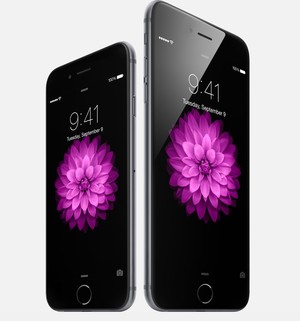 The reaction from newsrooms is a fusion of optimism and caution. Here’s what some of the leading thinkers in technology and journalism are saying about the new iPhones:

Roger Fidler, program director for digital publishing at the Donald W. Reynolds Journalism Institute (RJI) blogged on their website that Apple’s convergence of the smart-phone and mini-tablet will mean a better user experience.

“For news organisations, smartphones with larger screens should make reading and viewing their content more appealing to owners of all ages, especially seniors.”

RJI’s 2014 Mobile Media News Consumption Research indicates people who have tablets and smartphones tend to use mobile media more for news than those who only had smartphones. They also were more likely to pay for mobile news content.

“I’m willing to wager that the iPhone 6 and iPhone 6 Plus introduced today will give a boost to news organizations as well as Apple,” Fidler said.

Mario García, founder of García Media and an adjunct professor at Columbia University Graduate School of Journalism, believes phones with larger screens may draw some news consumers away from the larger tablet, but won’t replace the device entirely.

“The larger-screen phone will probably lead editors and designers to prepare more curated editions for newspapers and magazines, and, as a result, may lead back to tablet editions that are more evening-oriented,” he told Poynter.

However, it is the larger screen size of Apple’s new iPhones that some believe is key to helping publishers better survive the advertising woes of transitioning to mobile. Creating a balance between visually having enough space for ads to be effective, and not so big that they interfere with a user’s experience, is critical.

Jason Kint, CEO of the Online Publishers Association shared this simple equation with Digiday: the larger the device’s screen, the more valuable the ad space. The cost per thousand impressions (CPM) of display ads on desktop and tablets is three times that of mobile.

“It’s more challenging on smaller screen to marketers’ content embedded into the experience,” he said. “Larger screens are an opportunity for brand marketers to be part of the experience.”

Time will tell whether the strong Apple brand will now be enough for publishers and advertisers to invest in news presentation on these larger-screen ‘phablets’.

But beware the shiny distractions of the iPhone products that draw attention away from what may be, Newsosaur’s Allan D Mutter has described, “the biggest game changer of all” – that is, the company’s effort to launch a mobile payments system: Apple Pay.

The technology allows an iPhone 6 user a paperless, and so quicker, more convenient payment option with simply a wave of the phone while holding its fingerprint sensor.

As Mutter identifies, this advance in e-commerce technology will shift more power and revenue to companies like Apple, Google and the mobile carriers who embrace it early.

He says the wireless payment system embedded into the new iPhones will “revolutionis[e] the way consumers pay for things – and merchants track their customers” and, if successful, “[this] frictionless new way of transacting business will disintermediate the media as never before.”

“Media companies need to…pay close attention to the evolution of the mobile payments ecosystem. Then, when the time is right, they need to buddy up with the likely winners,” Mutter advises.