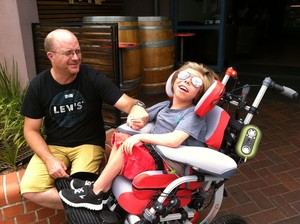 While some online entities like the BBC’s Ouch!, for example, have successfully embedded disability-focused and produced content within mainstream outlets, others have struggled. In Australia, PWD have launched a crowdfunding campaign to establish a new website to replace RampUp, a site formerly run and funded by the Australian Broadcasting Corporation (ABC) but now mothballed as a cost-cutting measure. RampUp was self-described as “ … the Australian Broadcasting Corporation’s website featuring news, discussion, debate and humour for everyone in Australia’s disability communities.”

Dr George Taleporos is the driving force behind the campaign. “This project is designed to ensure that the important perspectives of people with disabilities and our families are heard and to make real the disability rights motto of ‘Nothing About Us, Without Us’,” he said.

Dr Taleporos, and other advocacy journalists working in the disability media space, are driven by a desire to redress what they view as problematic news agendas and public discourse. In their view, despite the considerable consumer power of PWD and long-established media guidelines on disability, mainstream news media remains inclined to follow the well-trodden path of stereotypical representation of people with disability and disability issues.

The United Nations says 650 million people, around 10 per cent of the world’s population, live with disability. “They are the largest minority.”

The Convention has been signed by 158 countries, and there are 147 partners, and it has eight guiding principles. Embedded within these guiding principles are elements that serve to inform journalists, editors and newsrooms on the representation of people with disability. Article 8 of the Convention is most relevant to the news media, as it deals specifically with awareness-raising and stereotyping.

As ‘framers’, ‘agenda-setters’ and ‘gatekeepers’, journalists, sub-editors and editors are uniquely placed to deliver on the aspirations of Article 8. It says, in part, that signature States have a responsibility to “… combat stereotypes, prejudices and harmful practices relating to persons with disabilities …”, “… to promote awareness of capabilities and contributions of persons,” and encourage “ … all organs of the media to portray persons with disabilities in a manner consistent with the purpose of the present Convention.”

Time to change our reporting practices

People with disability (PWD) and those who research the representation of PWD in the news media are consistent in their observations about the way disability is presented. US-based professor, Beth Haller is a world leader in the field and helped develop the “media models of disability”. Professor Haller and colleagues claim the news media is still, despite decades of disability activism, inclined to represent PWD as tragedies or heroes, and to use language and imagery that serves to embed stereotypes and put at risk members of an already vulnerable community.

So, how would people with disabilities like to be portrayed and how do they think journalists and editors produce better and fairer reporting on them?

I surveyed members of a Facebook group dedicated to the fair and accurate depiction of PWD in the news media, and the self-representation of PWD for suggestions. Here’s the list I curated based on their suggestions:

10 Tips for journalists and editors on representing disability

1) Represent (make sure every show, every advertisement etc. has PWD) and don’t use sadomasochistic language (suffers, bound etc).

2) Use common sense – that’s subjective, but don’t do the heroes or pity thing.

3) People with disabilities should be included in the media, without having to focus on the disabilities. The “wheelchair bound” woman, is actually a mum, an officer worker, a volunteer, a sister, an Aunty, a daughter, who happens to use a wheelchair. The “Blind Lawyer” is actual a man, a person, a father etc who happens to be blind. The bi-polar man, happens to be a footballer, a brother, etc who has a form of mental illness. Why focus on the disability? The media should be asking us our opinions on a range if topics, not just disability related topics. One in three households has a lived experience of disability, so we are we so “novel”?

4) In my experience with the media, the young journalist, writes down appropriate language, people first, things like “person who uses a wheelchair” but when the get back to the office, either they Google other similar articles and see the commonly used “wheelchair bound” or their Editor, generally someone who is at least 25 years older, changes “person who uses” to “wheelchair bound” because that was the language used for when the Editor was more of a front-line worker.

6) I think a big part of the problem lies with how journos and other media people view PWD in general i.e. inspirational seems to be the default reaction. We need to be consulted on a wider range of topics i.e. not just assisted suicide or the Paralympic Games. And sub editors who are changing person who uses a wheelchair to wheelchair bound trying to save words need to be made aware that’s really shit.

7) ‘Suffers from’,  stop saying ‘suffers from’. Living with. Just because we have a disability doesn’t mean we’re dying. When someone who is healthy and able bodied does something they’re capable of to raise money for a disability charity doesn’t make them a hero. It makes them a compassionate human.

8) Do not represent disability as if physical disabilities are the only ones.

9) Cynicism Alert – No point in even trying. Tell them we like to be portrayed as either the pit or the pedestal, the heroic athlete or brave sufferer or the charity or welfare victim that they can be glad they’re not like – tell them we love the words ‘wheelchair bound’ and ‘confined to’ and ‘suffering from’, because it so accurately describes the state of people with disability in 2014 – tell them that autistics love to be talked about in highly medicalised language that talks about deficit rather than difference – and for God’s sake, don’t mention the fact that we occasionally get pissed or root people. You’ll ruin our IMAGE.

10) If we write for your publication, DON’T DUMB OUR LANGUAGE DOWN. Look to good publishers like Daily Life, The Guardian and ABC Ramp Up (now defunct). Get someone with a disability to write it! We’re underemployed and are often spoken about, not listened to.

About the author: Shawn Burns is a journalism lecturer and PhD candidate at the University of Wollongong, Australia. He researches the representation of people with disability in news media, and diversity and experiential learning in journalism pedagogy.