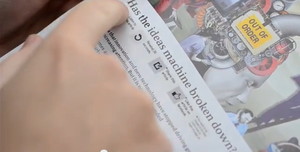 The concept is called interactive paper. As the name implies, the printed product responds directly to the reader’s actions, yielding a multimedia experience when the reader touches it.

At Contently, Herbert Lui describes three applications, two of which have passed the prototype stage and reached everyday practice. In each case, the technology used is conductive ink, which contains tiny particles of metal and thus conducts electrical current.

The first example is a “playable poster” created for Beck’s beer to promote a music festival in New Zealand. People seeing the poster on a street could touch printed “buttons” to hear one of 10 pieces of music.

As described in The New Zealand Herald, “The ink creates touch sensors which pick up electrical signals from fingers, and is connected to a processor at the back of the card which gives iPad-like touch to the paper. When activated, an electric speaker at the rear reverberates the board, turning it into an 80-watt speaker.”

Obviously, newsprint would not make a very good reverberation board, which makes the second application all the more interesting. “Feel Flavour – A Sonic Poster” uses Bluetooth wireless transmission technology and an app on the reader’s mobile phone to play sound on the phone’s speaker.

The poster represents an attempt to depict taste sensations via colour and musical chords. Individual spices are associated with specific chords that are played when the reader touches the appropriate area.

The downside, of course, is that the reader must install an app and establish a Bluetooth connection to the poster, but the effect, as seen below, is powerful.

The third example Lui describes is a prototype redesign of Vogue magazine by a team of four designers. Also using conductive ink, the team created a direct connection between the printed version and the mobile version.

Egglestone, who is digital coordinator, Media Innovation Studio, School of Journalism and Media, University of Central Lancashire, U.K., will speak at a session titled “Future Print: Interactive newsprint and the Internet of things.”

Describing Interactive Newsprint, Egglestone wrote on the web, “In this project we plan to develop an entirely new platform for community news based on interactive newsprint.

“While there are many possible configurations and uses of this technology for supporting new forms of reading and writing, we plan to explore those relating to the communication of local news.”

Since the concept is new and can be difficult to envisage, a prototype is in the works.