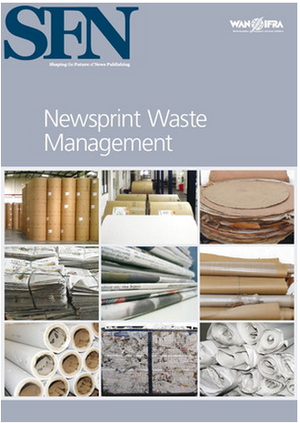 The report, which WAN-IFRA members can download for free (and non-members may purchase), seeks to highlight and place in perspective several issues that can affect the efficiency with which newsprint is used, thereby increasing the awareness of areas where savings can accrue. The topic has always been one of top priority, but with the increasing cost of newsprint and a not-too-bright supply situation, the question of how to control waste is becoming more and more important.

Roughly speaking, newsprint accounts for approximately 50 percent of the cost of producing the printed newspaper. This percentage varies according to region as well as the magnitude of other costs, especially personnel costs. However, in most cases it will lie between 40 percent and 60 percent of the total production costs.

At the same time, a closer look at the causes of paper waste shows that it is impossible to limit this topic to one or a small number of steps in the value chain. On the contrary, waste can occur at nearly all stages of production and delivery, including those over which the printing plant has no control. This makes combatting waste a highly complex, though no less important topic.

In more than 75 technical Special Reports published on various subjects by our association since 1984, paper waste has played an important role. The “Newsprint and Newsink Guide,” published 20 years ago, which continues to be regarded as a standard work by newspaper printers worldwide, deals in-depth with the subject and gives tips on how to avoid and reduce waste.

Newspaper printing technology, and with it the production and delivery of newsprint reels, has changed significantly. Modern newspaper presses run at much higher speeds and process both wider webs and heavier reels with a larger diameter as well as paper grades with a lower grammage in full colour printing throughout. The control of paper logistics and production in the press hall and mailroom by automated systems has also developed dramatically in the interim.

In addition, especially in economically developing regions, such as the countries in Eastern Europe, Asia and Latin America, page counts have increased considerably and continue to do so. Production technology is adapted and upgraded accordingly. Bearing this in mind, it is not surprising that the topic of waste prevention is playing an increasingly important role especially in the growth markets in Asia.

The WAN-IFRA South Asian Committee has focused its attention repeatedly on this topic and the chairman of this regional committee, Kasturi Balaji, Director of Kasturi & Sons, publisher of the leading national English-language Indian newspaper The Hindu, has written the report, and he deals with the latest technical and organisational conditions of modern newspaper production. His report describes, where appropriate, the special conditions in the markets of Southern Asia and India, focusing especially on the regional aspects there. Nonetheless, his remarks are of interest also for production managers in other countries who are responsible for waste reduction and who seek systematic solutions.

Creating awareness of the problem

Tackling waste calls for a commitment from the top of the organisation right down to the shopfloor. It requires not only the right attitude but also the efforts of everyone involved in newsprint handling, preparation and printing, and even those dealing with newsprint in an indirect way, e.g., editorial, circulation, and advertising departments; their decisions can determine the efficiency with which newsprint is used.

What is needed is a “process” rather than a “programme” approach in the matter of newsprint usage. This means that efficiency in the usage of newsprint is built into the day-to-day operations of the newspaper with the active participation from all functional areas.

What is also needed is a continuous assessment of whether the process – systems, methods and procedures – are indeed being followed as prescribed.

WAN-IFRA members can download the report for free and non-members may purchase it at https://wan-ifra.org/reports/2014/09/17/newsprint-waste-management

This article first appeared in the September-October 2014 issue of World News Publishing Focus.