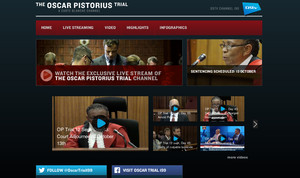 Pistorius, who was last week found not guilty of the premeditated murder of girlfriend, Reeva Steenkamp, but guilty of culpable homicide, has experienced his trial not just inside the Pretoria courtroom but outside too, in the vast public ‘court’ of social media.

From the shooting in the early hours of February 14, 2013 to the verdict, and now beyond (in anticipation of an appeal), social media has assumed the role of real-time news breaker, information provider and commentator in an unprecedented manner in South Africa.

Data Driven Insights reports that over 3.5 million tweets regarding Oscar Pistorius were been sent since that fateful day last February – confirming its ascendancy to the biggest social media story South Africa has seen, according to SABC News.

In order to not just capitalise on, but even remain a relevant part of the conversation, local journalists and media organisations have increasingly moved into the online space with journalists documenting every step of the trial from the courtroom, most notably via twitter.

Eyewitness News senior reporter, Barry Bateman is a great example of the audience appeal of social-media active journalists covering the trial – going from around 10,000 followers the week before the shooting, to over 160,000 after Pistorius’ bail application and 228,000 following the verdict.

Media organisations have also created dedicated accounts and other online platforms for constant, as-live coverage including, innovatively, 24-hour ‘pop up’ channels and dedicated websites set up solely to report on the trial – especially since February this year when the North Gauteng High Court allowed – for the first time in South African history – the criminal trial to be largely televised and broadcast live.

It has been unfamiliar territory for the majority of South African newsrooms and journalists up until this trial, the slower uptake of which Caxton Professor of Journalism at the University of the Witwatersrand, Anton Harber notes had its advantages and disadvantages.

“The digital divide – which means that many people are excluded from the internet – exacerbates our country’s deep social and economic inequalities. Those who live on the margins of our society are now pushed even further out beyond the margins, as they do not have access to the digital tools of the modern economy,” Harber told the World Editors Forum.

“It has given traditional media, especially newspapers, a longer lease on life. It allows us to leapfrog technologies and go straight to mobile. On the other hand, we have not yet enjoyed the full advantages of participative, interactive media and the way it can empower and enrich active citizenship,” he said.

“Mao would have put it this way: you can give a man a fish, you can teach him to fish, or you can give him access to global fish markets. It is the latter that everyone now wants and needs.”

Harber said an evolution already occurring in the country’s media ecology toward social media as the “primary conveyer of breaking news, commentary and discussion, with traditional media scrabbling to catch up” was hastened by the Pistorius trial.

“[It] was driven by some journalists giving extensive and detailed real-time coverage on social media, which drew audiences and allowed for a rich discussion on all the minutae of the case,” he said.

“These changes have shown up the daily newspapers, since they have been the least able to compete on this story. I think this has brought a dramatic shift in our news industry, speeding up the decline of the daily papers. Weekly papers, online sites, television and radio have done better.

“[But] our State of the Newsroom 2014 report [due to be published next month] shows that all our newsrooms have now integrated social media into their news-gathering and dissemination.”

Mail & Guardian editor-in-chief, Chris Roper, agrees that the trial “dragged the South African media into the social media era”, accentuating what had previously been a slow progression for journalism to a growing online and “much more reader-first news landscape now”.

“This competition for Pistorius mindshare is what finally broke journalism here,” Roper wrote earlier in the trial, “it forced local media outlets finally to come to terms with how the consumption patterns of readers, viewers and listeners have been changing over the past few years. Thanks to the culture of immediacy fostered by the internet, media organisations can only own a breaking news story for a few seconds.”

“News organisations are going to have to change, if they haven’t already, the way they think about the life cycle of stories … so we’ll see more, and more diverse, news sources in the future,” Roper told the World Editors Forum.

The transparency of the Pistorius case has also allowed for a remarkable online convergence of not just media reportage and citizen reaction, but also expert legal and forensic opinions, such as the active legal commentary of South African legal specialists David Dadic and James Grant.

WAN-IFRA Research Fellow Julie Posetti observed the intermingling of this commentary in realtime on Twitter and noted the impact: “The Constitutional protections for freedom of expression enjoyed by South Africans allow SA citizens to commentate on court proceedings and judgements with considerable liberty and it was fascinating to see a law professor like James Grant live tweeting the judgement and his immediate reaction to it, while interacting with law students, opinionated citizens, and journalists.”

These contributions have enhanced the social media conversation and allowed complex legal issues to be clarified and analysed in real-time throughout the trial, for the consumable benefit of all engaged.

And, as Anton Harber observes this led to some of the most informed debate around a trial that the country has seen.

“Many South Africans have learnt a great deal about the complex and intricate workings of our justice system – which is enormously valuable – and it has demonstrated that this trial at least has been fair,” he said.

Both Harber and Roper also picked up on an important trend concurrently complementing the recent higher demand for online media – the distinct increase in use of mobile devices in South Africa, and its direct correlation with higher social media access and use.

The annual “Social Media Landscape 2014” study by World Wide Worx and Fuseware on the South African market revealed the number of smartphones in use on South African mobile networks was expected to pass 16 million during 2014.

“Ultimately, most of these phones will be using some form of social network or instant messaging platform, suggesting social network penetration passing the 33% mark during 2014. If all of these were adult users, it would represent 50% of the adult population,” said World Wide Worx Managing Director, Arthur Goldstuck in the study.

South African media commentator & editor of Grubstreet, Gill Moodie also pointed to this study’s noted increase in smartphone penetration as a key reason for the increase in social journalism, as well as the momentum of a “crazy news year in South Africa”.

“The Pistorius case has certainly been a tipping point for social media use in South Africa in general – and for journalists in particular – as were the other two big news events in the past year: Nelson Mandela’s death and South Africa’s May 2014 general election.”

“This story [has] belonged mostly to social media, online, television and radio,” she writes.

Data provided by digital consultancy firm, 25AM, shows that over the two days of the verdict reading last week, there were more than 600 000 mentions on social media, the majority on Twitter. The social chatter around Pistorius averaged 15 422 posts per hour and 257 per minute.

Online conversation trend for the Pistorius verdict – provided by 25AM

Guilty or Not guilty?: Twitter predictions from Day 1 of the verdict – provided by 25AM

SABC News provided a fantastic time-lapse map of the geographical origin of tweets (and their prediction of Pistorius’ verdict) via Trendsmap.

Guilty or Not Guilty?: Time lapse map of tweets via Trendsmap

Struggling to understand how the legal complexities of possible judicial outcomes for Oscar Pistorius? This infographic from CNN was circulated via Twitter during Day 1 of the verdict.

Twtrland provides analysis of the twitter account associated with the DSTv 24hour online channel also dedicated to coverage of the trial: @OscarTrial199. The account is ranked in the top 0.5% of all social media users.

Where does all this leave social media adoption and use in South Africa? The newly released annual report by World Wide Worx and Fuseware shows us the landscape. Inforgraphic by Gullen and Gullen.