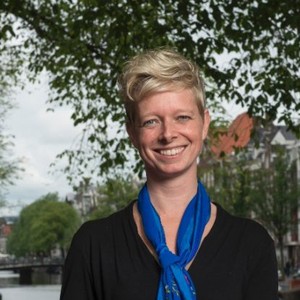 In the meantime, she says, news publishers need to stop being so modest about their mobile activities. “They should shout out more what kind of interesting mobile propositions they have. … They should talk about it, they should shout it out. They should communicate about it with advertisers, with creative agencies, with media agencies. Because whenever they tell their story, people get enthusiastic about it, and they will ask for mobile inventory,” she says.

Stromeier says the cultural hurdles to mobile advertising – mainly a reluctance to embrace change – should not be underestimated, but she urges publishers and advertisers to find the courage to experiment.

Stromeier, who is Dutch, joined Mobext in January 2014 from Layar, a leader in mobile augmented reality and interactive print. She previously was key account manager for mobile at the Telegraaf Media Groep, whose holdings include leading Dutch daily De Telegraaf. Mobext was launched in 2007 as the mobile advertising network of what is now Havas Media and claims to have been the first agency to offer specialised end-to-end mobile marketing services globally.

Ad spend will catch up with device usage

Industry experts agree that mobile ad spend will catch up with device usage once the technical and cultural barriers are overcome. Currently, while consumers spend 20 percent of their time using mobile devices, ad spend comprises only 4 percent of advertisers’ budgets, according to the Annual Internet Report from Kleiner Perkins Caufield Byers.

Addressing some of the remaining technical barriers to mobile advertising, Stromeier says the Interactive Advertising Bureau is making good progress toward creating standardised formats that work well across a variety of devices.

The most serious remaining barrier, as is often pointed out, is the current impossibility of tracking most of users’ mobile activity. That is because the vast majority of mobile internet traffic takes place via apps, and cookies, which form the basis of desktop web user measurement, are not supported in apps. So there is no way to track the user from a mobile app to a transaction on his or her desktop computer, for instance. That means  marketers cannot conduct what they call “brand-lift” measurement – a crucial drawback. (See “Tracking consumers across platforms is key to mobile ad revenue,” on page 25 of the September/October issue of World News Publishing Focus magazine, for more information.)

However, Mobext – whose clients include McDonald’s, Peugeot, Citroen, KLM, KFC, and Coty – is testing cross-device reach with a technical partner in the Netherlands, and Stromeier is confident a solution will be found in the near future.

For now, mobile advertising’s potential for increasing revenue directly is illustrated by a campaign undertaken by McDonald’s in the Philippines, she says. A mobile website that the company set up for its ordering service resulted in a 5-percent increase in income. A mobile app in which coupons were shared was even more successful, Stromeier says. “What was really striking was that the mobile coupons delivered a spend of 18 percent more than printed coupons. That’s interesting for all those companies that send out printed coupons.

“It’s not about awareness; it’s about performance, about creating leads, about improving revenue.”

This post is part of a series of interviews and articles on the occasion of the Tablet and App Summit (#TAS14), which takes place on 14-15 October in Amsterdam. #TAS14 is a paid conference part of the World Publishing Expo 2014 – the largest annual global trade exhibition for the news publishing and media industry.