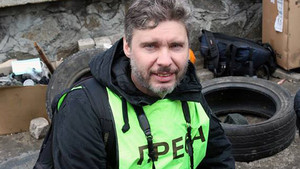 The confirmation of the death of missing Russian cameraman Andrey Stenin in Ukraine last week focused the international spotlight on the risks confronting media workers documenting the conflict.

Stenin was the fourth Russian journalist to be killed in Ukraine so far this year; the other three being Igor Kornelyuk, Anton Voloshin, and Anatoly Klyan. Italian journalist Andrea Rocchelli and his Russian interpreter, Andrey Mironov, were killed in May whilst sheltering in a roadside from mortar fire, near Sloviansk, in Eastern Ukraine.

According to Russia Today, nine journalists have been abducted and tortured in Eastern Ukraine this year, both by pro-Russian separatists, such as in the case of Vice journalist Simon Ostrovsky, and by pro-Ukrainian forces, as happened to Zvezda TV journalists Andrey Sushenkov and Anton Malyshev.

According to RIA Novosti, Andrey Stenin was working as a cameraman when the car he was in was hit by heavy fire on a motorway near Donetsk.  He had been missing for nearly a month when his death was confirmed last week.

RIA Novosti, Russia Today, the Foreign Press Organisation, Junge Welt and Human Rights Watch, suspecting Andrey Stenin had been kidnapped, had all called for his release, and there had been a photo exhibition in Yerevan in support of the journalist, as well as rallies around the world.

Syria is the most deadly place in the world to be a journalist right now, but Ukraine ranks third after Palestine, in terms of number of deaths.Ukrainian Pravda journalist Ekaterina Sergatskova told the World Editors Forum that reporting in Eastern Ukraine generally carries far more risks for Ukrainian journalists that it does for Russians, although she does concede that Russian journalists are also now facing risks in Ukraine:

“As soon as the confrontation began, the leaders of the People’s Republics of Donetsk and Luhansk took a visionary decision to avoid contact with the Ukrainian press. They could beat, kidnap and killed Kievan journalists…[Editor’s note: read our interview with prominent Ukrainian investigative journalist Oleksandr Akymenko here] started on a mass scale in Slovyansk.”

“There, many Ukrainian bloggers and journalists were taken prisoner. Over time, similar processes began on the Ukrainian side: knowing that the publications LifeNews, Russia-24, Komsomolskaya Pravda, Russia Today and others cover events in Ukraine untruthfully ,they began to detain them and refuse them entry into the country,” she said. [Editors note: this is an opinion expressed by a source, and it does not represent the view of the World Editors Forum.]

Journalists do not need to actually be reporting on location in Ukraine to be in danger, however. For Russian journalists, reporting the ‘wrong’ story about Ukraine can be dangerous even within Russia itself. Two weeks ago, journalist and politician Lev Schlosberg was badly beaten up after publicising the funerals of two Russian paratrooper soldiers in the Russian town of Pskov. Following this, a group of Russian journalists travelled to Pskov from Moscow to investigate, only to be attacked and threatened at a graveyard whilst in search of the alleged graves.

“A tiny Pskov newspaper broke the story of Russian soldiers who died on duty in Ukraine. In a few days’ time its publisher, Lev Shlossberg, was attacked and beaten so hard he had partial memory loss. The journalists from Moscow, who followed his lead and came to see the funerals of the soldiers, were attacked twice so they couldn’t have pictures of what was happening,” he said. “Apparently even the fact that Russia’s waging a war is a taboo now. At least for regional media, that cannot hire bodyguards for the journalists.”

Russia comes in at 148th out of 179 countries in terms of press freedom, according to Reporters Without Borders. Babitsky was damning in his critique of the Russian media’s ability to cover the conflict in Ukraine, hinting that journalists are self-censoring in order to protect their own safety or professional reputations, even though it is explicitly stated in the Russian constitution that censorship is illegal:

“Ukraine started to be a dangerous topic in Russian media even before the war began. The editor-in-chief of the most widely read online media, Lenta.ru, had to resign in March of this year over her refusal to fire a journalist covering the revolution in Kyiv. As a result Russian web lost its most popular destination that was not proudly hostile to everything Ukrainian. The whole balance of news changed overnight. Since then we’ve lost other sources of information too,” Babitsky said.

“The only decent news-program on an over the air TV-channel, Неделя on REN-TV, was closed. Government media, TV channels in particular, stopped even pretending they’re doing the news and reversed to fiction.”

Russian news outlets are covering the story of Russian soldiers fighting in Ukraine, however. Dozhd, for example, is compiling a list of Russian soldiers who have been reported injured, taken captive or dead on Ukrainian soil, and many papers have written about the sudden influx of injured soldiers in Russian hospitals.

The internet is seen as an outlet for dissent, with many journalists and citizens using blogs and social media platforms to express views that would not be permitted on the television or in newspapers.

Babitsky is highly critical of the current news climate in Russia:

“[One issue is] the pressure Russian journalists endure while trying to cover war-related issues from the safety of Russia. My colleagues were attacked at a cemetery in Pskov region, local journalist and regional deputy Lev Schlossberg, who broke the story of Pskov soldiers fighting in Ukraine, was beaten with an iron rod. He is now in a hospital with a serious brain injury (and recovering, fortunately). Important thing is, Russian journalists risk their lives if they write about the war even in Russia,” he said.

“Needless to say, many of them risk their jobs…they face all the risks, dangers, and deprivations of war, and some of them, including Andrei Stenin, have lost their lives. Both sides of the conflict tend to perceive the journalists writing from the other side as partial enemies (or at least accomplices rather than neutral observers). It leads to problems too, as journalists are routinely detained and humiliated by armed men.”

Vice President of the European Federation of Journalists, Nadezda Azhgikhina, commented last year that “The beating of journalists has sadly been a practice in many Russian regions for many years. It is one of the worst forms of censorship, and it often ends with impunity.”

Note: Impunity is only too common when journalists are attacked or killed and UNESCO has launched a campaign to combat the problem. 2nd November 2014 is the official International Day to End Impunity.