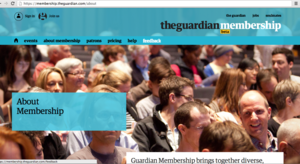 While The Guardian’s announcement is making waves in the media sphere this week, it seems important to consider that such schemes are hardly ‘new ground’. As Professor George Brock, Head of Journalism at City University London, points out, this model is similar to the ‘readers club’ idea which “…first surfaced in the 19th century and has been tried most recently in Britain by The Times.”

Slate, one of the pioneers in digital-only news and media, launched a similar program in April this year, namely SlatePlus. This ‘membership’ offer allows loyal Slate readers a chance to actively contribute to the Slate newsroom by offering special access to writers and editors. For just US$5 per month or $50 for a year-long membership, it also offers ad-free podcasts, single page articles and the potential to view feature stories early, as well as possible bonus podcasts and segments. When David Plotz, former editor at Slate, first introduced the idea he was very careful to remind readers that this was not a ‘paywall‘.

TPM, another American online-only example launched a similar scheme at the end of 2012, once again focusing on reader interest in the journalistic process and assuring all readers that this new approach was not a ‘paywall’ and never would be. John Marshall, the editor at TMP praised his loyal audience and promised them a more rewarding experience if they joined TPM Prime in a post launching the new membership opportunity.

“So to build and nurture that core group of readers TPMPrime will feature a special members only discussion forum, free from trolls and flyby commenters. TPMPrime is your backstage pass to everything TPM,” Marshall told readers.

The Wall Street Journal, meanwhile, offers subscribers the chance to join Wall Street Journal+ for free. If they sign up, they get ‘premium’ access to the newsroom through potential discussions with Editor in Chief Gerard Baker. Club members are also offered perks like free e-books, competitions and discounts. But if you’re not a subscriber, there is a US$189 joining fee for Wall Street Journal+.

The New York Times and Techdirt also have schemes which offer similar access to ‘newsroom inisght. ‘

But Brock suggests that a comparison of these schemes and that of The Guardian could ultimately prove to be misleading and congratulates all who experiment bravely.

“Each user or reader has a different perception of each journalism provider and a different relationship. What will work well for one outlet will fail at another. The sites which get my vote are the ones that experiment most intelligently, quickly and boldly.”

So what’s actually new about The Guardian‘s club?

All these membership offers, it must be noted, offer add-on’s to the reader experience in the sense that they do not force members to pay for every-day content, instead they offer more material and an easier, or more pleasurable, news consumption experiences. In this sense, they defy the traditional paywall model whilst still offering loving and loyal fans the chance to contribute.

The biggest difference between The Guardian’s promised membership experience and that of previous models is that The Guardian is also offering a physical space to it’s potential members in the form of the re-development of Midland Good’s Shed, a warehouse right opposite The Guardian’s headquarters in London. This space will offer events and activities to members. Whilst Slate has also offered events, in the form of the Gabfest, no one has yet offered the scope or scale of events the The Guardian is promising. And when the propritor of French newspaper Liberation announced (extremely innovative) plans to turn the paper’s headquarters into a cafe, cultural space and start-up incubator, it’s journalists staged a rebellion. This cross-channel contrast demonstrates the fact that The Guardian enjoys the loyalty of its journalists, not just its readers.

Ken Doctor, prominent news media analyst and the creator of Newsonomics, applauds The Guardian for implementing the new model while still allowing free access to its content.

“Importantly, membership for The Guardian isn’t a euphemism for subscription. The Guardian content remains freely accessible, with voluntary memberships asked for. Some have suggested The Guardian put up a tip jar of sorts to support its unique journalism. [But] Guardian Membership and Guardian Space takes that idea and blows it out,” Doctor wrote at Nieman Lab

Doctor marvels at the sheer scope of The Guardian’s project.

“Overall, The Guardian believes it will sponsor hundreds of events each week across Britain through the Guardian Live push,” Doctor said.

“Further, the initiative will be expanded to the U.S. and Australia in 2015. That makes it a global strategy, with lots of cross-marketing opportunities to be surfaced,” he continued.

But who will pay up?

Whilst many, like Doctor, are praising the scope of the new membership offer, others are more sceptical, wondering whether consumers will actually be willing to pay for membership, particularly given the arguably limited tangible incentive. Jasper Jackson,  a media anaylist for The Media Briefing, believes that the membership opportunity offers very limited rewards to members.

“Both resemble very expensive loyalty cards (with the added bonus of being able to call yourself a ‘card-carrying Guardian reader’). And for the moment at least, the events portfolio will mostly appeal to those within easy reach of London,” he wrote.

“And the Guardian scheme isn’t just a little light on tangible benefits, it’s not even offering an ad-free experience, though that’s perhaps understandable given how appealing advertisers might find the ability to target someone with enough disposable income to drop £15 or £60 a month on being a Guardian member,” he continued.

Ultimately many, including Jasper and Brock, believe that the membership offer is mostly geared at stirring up the emotions of loyal consumers in order to get them to pay up. “It’s an appeal to the emotions of those who identify with the Guardian brand,” Jasper said.

This scheme might be an risky business model for other news brands, but not so for The Guardian, according to Jasper, who suggests that the Guardian has both the financial support and loyal fan base to test such a chancy idea.

“That will sound counterintuitive to most media businesses struggling to persuade people to pay, but The Guardian‘s healthy bank balance gives it the space to be counterintuitive and it also has the backing of the Scott Trust to pursue a mission of becoming the ‘world’s leading liberal voice,” he notes.

Ultimately The Guardian‘s new membership offer represents both an exciting potential new business model for media brands that have built up a loyal community of interest around their content, and a fresh tributary in the multi-streamed news business model of the future.