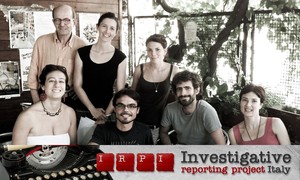 Economies are globalising. Corporations are globalising. Organised crime is globalising. And so, too, must investigative journalism go global. Without cross-border collaborations, the fourth estate’s traditional scrutiny of corruption will likely languish, unable to map hidden trails of money and influence as they become so much broader and more complex.

Months of planning discussions via Google groups and Skype followed that initial meeting.

Finally, IRPI was born on 21 July 2012 in Rome. Its main areas of interest are public spending, organised crime, environmental degradation, corporate policies that lead to illegal profits or social injustice, the interests that hide behind certain political or corporate policies and illegal trafficking of any kind.

As IRPI President Cecilia Anesi told the World Editors Forum, “We can’t forget organised crime in Italy is one of the strongest in the world. Italy is the homeland of Cosa Nostra, ‘Ndrangheta, Camorra, Sacra Corona Unita. These organisations don’t think or act inside the national borders anymore. They internationalised their activity, work transnationally and cross border, they are interconnected in this global world. Therefore, to keep up we have to follow the same transnational and cross-border, interconnected, global approach.”

For now all IRPI members devote their time to investigations undertaken on a mainly voluntary base, in the interests of a long-term investment. One of the big issues facing IRPI – like the rest of journalism – is the need to achieve a sustainable business model. Some investigations are commissioned, others are funded through grants. Some projects have a limited budget to cover expenses while a portion of stories are sold, once completed, to news outlets that publish them.

The maths do not yet add up. When stories are not funded through grants or are commissioned, the big problem is how to reward six months of journalistic work for an investigation with the relatively small amount of money that comes from selling a single piece to a news outlet. The main income at the moment comes from offering a “fixing service” to foreign media and reporters, acting as a “professional tourist guide” for foreign journalists who need insights into the Italian jungle. IRPI is also considering launching its own publication.

Italy is IRPI’s homeland and all of its members are Italian, but the approach is most definitely global – the watchwords being “trans-nationality” and “cross-border” investigations.

Some stories are specifically commissioned for, or in partnership with, a news outlet. In the case of the story “Mafia in Germany”, that unveils the powerful network of organized crime between Italy and Germany, the story was produced by FUNKE Mediengruppe, in collaboration with IRPI. FUNKE originally approached IRPI for a fixing service that eventually developed into a real collaboration, with IRPI co-authoring the investigation. IRPI also involved its contact in Southern Italy, the local newspaper Il Grandangolo of Agrigento which contributed to the reporting as well. The story was then published in Italy on WIRED Italy and on Il Grandangolo.

Some stories start from an Italian perspective and develop an international angle, as in a food-fraud investigation that covered tomato puree imported from China but labelled “Produced in Italy”. That story was done by IRPI, sponsored by the European Fund for Investigative Journalism and published in the Guardian in the UK.

In June 2014, following a scandal that revealed mismanagement of public funding connected to the Expo international exhibition (scheduled to open in May 2015 in Milan) and led to the arrests of public officials, managers and a former MP, IRPI launched ExpoLeaks. It’s an independent whistleblowing platform for anonymous reports of corruption that allows citizens to share – securely – information and records on possible illegalities or wrongdoings surrounding construction projects for Expo 2015.

Most recently, IRPI published “Wolves of Europe” a six-month-long transnational investigation carried out by seven reporters from four countries. Sparked by a previous story IRPI worked on, the collaborative investigation was produced by Germany’s CORRECT!V and IRPI in Italy, as well as the newspapers Tages-Anzeiger in Switzerland and El Confidencial in Spain. The investigation, coordinated by Anesi, was then published with different angles in four languages in der Freitag, Tages-Anzeiger, El Confidencial and the Italian weekly L’Espresso. CORRECT!V also produced a multimedia bilingual website – in German and English – hosting the main story.

IRPI is also battling an historic disdain for investigative journalism in Italian newspapers. Astonishingly, some stories that involve Italy are more easily published in foreign media than Italian ones. While investigations often produce in-depth journalistic pieces, Italian media are not interested in publishing more than about 600 words. “[600 words] is not an investigative story, that is [more like a] simple court report,” Cecilia Anesi said.

“IRPI is an experiment,” Anesi explained. “Sometimes we feel like real pioneers, sometimes like guinea-pigs. Sometimes we ask ourselves why are we doing this, and sometimes, when after days of investigations, we hit the mark, we realise there is nothing better than what we do. I feel blessed for living in a time when something like IRPI is possible, when doing cross border investigations, that benefit from the immediacy of the world wide web, becomes an amazing adventure that involves each time at least four languages, places in the world, corners of history. It’s indeed the work in close contact with colleagues from all over the world that gives us the strength to push it forward”.

Note: You can read more on the IRPI case study and trends in global collaborative investigative journalism in Trends in Newsroom 2014 (available free to WAN-IFRA and World Editors Forum members and for purchase to non-members), edited by Julie Posetti

Declaration: The author of this post, Federica Cherubini, has worked with IRPI.