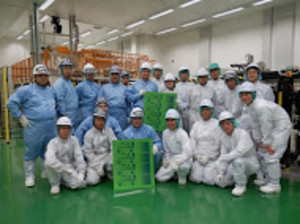 Participants in the event visited the production line in the new building, which is 140 meters long and operates under cleanroom conditions to ensure consistent quality of plate production. Cleanroom conditions require special over-clothing (see photo) and an air shower treatment before entering.

Toray Industries, a manufacturer of waterless printing plates, was founded in 1926 and has a global presence with factories and sales offices in Asia, Europe and North America.

The main businesses of Toray are synthetic fibers, carbon fibers, plastics, films and chemicals. Many of the products are developed from its proprietary polymer technology base and are commonly used by the electronics, packaging, textile, automotive and aviation industries. Recent annual sales approached 10 billion euros.

The new European waterless plate plant started production in November 2013. The production plants in Japan and in the Czech Republic are comparable in terms of quality and output. The European project was launched in May 2011 with a feasibility study only two months after the severe earthquake in Japan and one month after a user group meeting of waterless newspaper printers.

“Reduction of water consumption can be significant,” said Mitsunori Hayashi, General Manager of Sales and Marketing for the Toray Graphics factory in the Czech Republic. “A Swiss waterless printer tells us that he has eliminated the use of approximately 250,000 litres of water annually, water that would have come from a key local source of drinking water. The elimination of toxic chemicals also reduces the possibility of contamination of precious water supplies and creates a safer working environment for employees.”

Used water from plate developers needs to be recycled; silicone and water are separated, and the water can be re-used.

Three very thin layers are applied during the plate making process. Their thickness is between 1.3 and 9.6 μm. The production window for making waterless plates is smaller than in conventional plate making, according to Toray. The very thin silicone layer is especially critical.

“2014 has been a big year for waterless printing,” said Mitsunori Hayashi, General Manager of Sales and Marketing for the Toray Graphics factory in the Czech Republic. “Ecological printing is no longer seen as an expensive luxury but as a profitable business. As a result, we have opened a new waterless plate manufacturing facility in the Czech Republic to address the fivefold increase in sales and turnover of Toray waterless printing plates over the last decade, and to make plates more readily available to our customers in Europe and the Americas.”

Toray says it has a market share of thermal printing plates close to that of Fuji, whereas Kodak has by far the largest market share.

Toray sells about 70 percent of its plates to newspaper printers; the rest go to commercial printers. Toray says there are currently 19 waterless newspaper presses (Cortina) with 85 printing towers installed and running. According to Toray, waterless printing is now a niche market, with an annual growth rate of about 2 percent.

During the open house, a seminar and a Q&A session offered opportunities to learn more about Toray in general and about waterless plate technology specifically. The seminar keynote speaker was Dr. Samir Husni, a North American expert on magazine and publication printing, who envisages a renaissance of print after the digital publishing hype has passed its peak.

Husni reported the latest figures from the U.S. market:

Toray General Manager Mitsunori Hayashi and Production Director Takayuki Kamei introduced the company and its range of activities, and gave details of the manufacturing process of waterless printing plates.

Toray, founded in January 1926, today has capital of more than 1 billion euros and runs 253 companies worldwide with almost 46,000 employees. Business segments are environment and engineering, carbon fiber composites, IT-related materials, life science products, fibers and textiles, and plastics and chemicals. The plant in Prostějov goes back to September 1997; production started in 1999. The new building for plate production was added to the Czech plant in 2012 and 2013.

In a Q&A session with Toray managers during the open house, retrofitting conventional newspaper presses to waterless was posited as an option for the future. It became clear that Toray would like to see some development in this direction. In the area of conventional presses the conversion to waterless offset is possible. A typical process change would probably takes three to four hours, experts said.

Toray Industries will be exhibiting at the upcoming WAN-IFRA World Publishing Expo 2014, 13–15 October in Amsterdam. The Expo is expected to draw broad global attendance. Toray will be located at stand 11.565 and will have copies of the second edition of the “Toray Waterless Journal” available for attendees.

Toray welcomes the World Printers Forum, which will be inaugurated during the Expo: “The World Printers Forum, co-located with the World Publishing Expo, is generating even more interest within the printing community for the event. There will also be an open stage in the exhibition hall for discussions about the Power of Print that is likely to stimulate good interaction among attendees.”

“We encourage show attendees to stop by our stand,” General Manager Mitsunori Hayashi concluded. “Customer stories, advice from our experts, and our showcase of a variety of the product possibilities waterless offset printing affords adopters of the technology will help visitors gain the facts they need when considering a waterless printing decision. We expect it to be a busy and exciting show.”