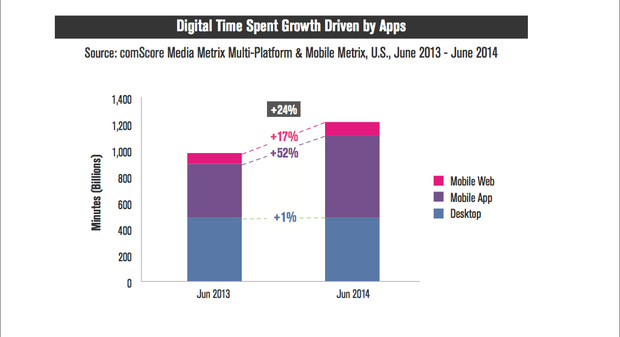 Graphic above: In the mobile world, apps dominate – and there are no cookies for them. This is a limitation to truly measure the impact of a mobile advertising campaign.

Facebook’s second-quarter results show that the company is now making 62 percent of its advertising revenue (which totaled US$ 2.68 billion) from mobile devices. That is the payoff for intense innovation efforts in video and in advertising. Ads are now pushed directly into people’s news feeds, making them more visible on a mobile screen, and a panoply of targeting options is available.

But a fundamental strength remains Facebook’s ability to maintain close contact with every individual user. Whatever platform people use to access their Facebook accounts during the day, they must log in. That means advertisers can precisely measure the impact of their campaigns across devices.

Amazon reached the same conclusion: Data on individual users is vital to earning mobile ad revenue. According to comScore, 31 percent of the merchandising giant’s users are mobile-only, and that figure continues to grow with no signs of slowing. “Amazon is known as a sleeping giant in the ad industry because it has rich consumer data,” Reuters commented on Amazon’s recent move to start building its own advertising technologies.

Worldwide, thanks to its strength in search advertising, Google remains king of the mobile-advertising hill. However, as Mike Isaac of the New York Times commented in July, “Google faces a persistent headache: Consumers are increasingly moving from desktop computers to smartphones and tablets. And as mobile ads […] become a larger part of its business, Google is less able to charge the same premiums that it has for its lucrative desktop ad business.”

A relatively small percentage of Google users log in via Gmail or have a Google Plus profile, making them followable. Obviously, that is not enough. In early August, the press reported that Google is working on a new technology to follow and target users across platforms.

And the winners are apps…

To compare Google’s mobile problems with those facing news publishers is a stretch, of course, because the amounts of ad revenue at stake differ by several orders of magnitude. But news publishers also have problems following users when they hop from one device to another, from their home desktops to their smartphones, from their office PCs to their tablets. Regardless of what publishers do to improve their mobile offers, this weakness in cross-device tracking and targeting does not exactly build confidence with advertisers.

In the desktop-based past, cookies dropped in a user’s browser would do the job. They would tell an advertiser, for example, which news site should be credited with sending the user from a banner ad to the advertiser’s site. But in the mobile world, apps dominate – and there are no cookies for them.

Flurry Analytics says this year, 86 percent of the average U.S. mobile consumer’s time is being spent on apps. “The data tell a clear story,” says Simon Khalaf, Flurry’s CEO. “Apps, which were considered a mere fad a few years ago, are completely dominating mobile, and the browser has become a single application swimming in a sea of apps.”

The clear-cut solution would be to push deterministic cross-device tracking, asking users to register for web sites and apps on every device they use. Some publishers do that already. But only companies with a huge reach, such as Apple, Facebook, Amazon or Google, can monetize that kind of closed ecosystem.

If we news publishers don’t want to cede all our potential mobile revenue to those giants, we could take a cue from Robert Webster, chief product officer, Crimtan: “Publishers and providers of log-in data could pool their resources together, with appropriate controls and consent,” he suggests.

An alternative method is described by Scott Schmidt, mobile director of PIVMO: “If the users are not logged in on websites and apps, the only way to properly identify that person across devices is to switch to a probabilistic model,” he says. “It creates a unique and persistent ID across all devices based on a large number of data points such as screen resolution, device type, and operating system… Although not 100-percent accurate, many players in this space claim roughly 70 percent up to 90 percent accuracy.”

Of course, “probabilistic” sounds like a fancy way of saying “educated guess.” And marketers must understand that in many cases, cross-device results will measure only a percentage of the true impact.

“Those who offer cross-device targeting have to be open and honest about these limitations and their implications,” says Webster. “Understanding such dynamics will become the key to running effective cross-device campaigns and analyzing performance. Only then will cross-device opportunities live up to the hype.”

This post is part of a series of interviews and articles on the occasion of the Tablet and App Summit (#TAS14), which takes place on 14-15 October in Amsterdam. #TAS14 is a paid conference part of the World Publishing Expo 2014 – the largest annual global trade exhibition for the news publishing and media industry.

This is an extract from the SFN Report on mobile, due to be published in October.