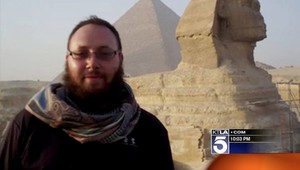 Sotloff, described as a “brave and imaginative” freelance war correspondent by the Wall Street Journal, disappeared in Syria in 2013.

Late yesterday, reports emerged that terrorism monitors had uncovered a video of the grotesque beheading of Sotloff, which ISIS later apologised for publishing prematurely.

“Despite statements made by their executioners, the murders are not an attack on the United States alone, but on all citizens around the world who rely on independent journalists to provide critical news from war zones and shed light on atrocities,” Larry Kilman said. “They are the eyes and ears of us all.”

Syria is currently deemed to be the most dangerous country in the world for journalists, with at least 70 media workers killed during the conflict, 80 kidnapped and 20 currently missing.

“Even among the growing number of attacks on journalists globally, the killings of Mr Foley and Mr Sotloff are particularly chilling. The international community must do its utmost to ensure that journalism and journalists are respected  and the perpetrators of these crimes are brought to justice,” Kilman said. “Courageous men and women should not be attacked and killed merely for doing their jobs.”

How did we come to this? We are supposed to bear witness to the news, not become the news. I’m sick about it. #Sotloff