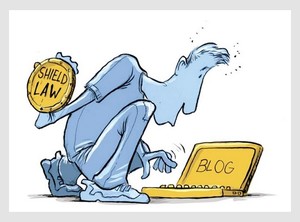 Titled UNESCO Internet Study: Privacy and Journalists’ Sources, the project will be led by WAN-IFRA Research Fellow Julie Posetti, who is an Australian journalist and journalism academic from the University of Wollongong, currently based in Paris with the World Editors Forum.

The main purpose of the research is to map changes in legal protections for journalists’ sources globally, and the effectiveness of them, in the context of the changing digital environment. Ultimately, the researchers will also make recommendations for better practice.

Why is source protection essential?

The protection of journalists’ confidential sources is considered important to ensure a free flow of information, especially in regard to whistle-blowing. UNESCO’s Director of Freedom of Expression and Media Development, Guy Berger, told the World Editors Forum earlier this year that whistleblowers will fear contacting journalists if they have reason to doubt confidentiality. “The effect? Less news about corruption or abuse will enter the public domain, and everyone will be information poorer. No action can be taken on problems that remain hidden. This is why many countries have laws which shield journalists from having to reveal their sources,” he said.

Without adequate legal protection, a ‘chilling effect’ is likely, with holders of sensitive information being reluctant to come forward to journalists because they do not feel safe. “This is why it is a key journalistic ethic to shield sources from being exposed, sometimes even sustained by reporters at great personal cost and in the face of a legal process,” Berger said.

The confidentiality of sources is well established as an obligation in professional journalists’ codes worldwide. In as much as this is also a legal right, there is a long history, with Sweden enjoying a dispensation originating in 1766 whereby protection of confidential sources is so strong that journalists can be prosecuted for revealing them. Regional instruments also exist, such as the Declaration of Principles of Freedom of Expression by the African Commission on Human and Peoples’ Rights (2002). This Declaration upholds qualified protection of the confidentiality of journalists’ sources. The Council of Europe and OSCE have also developed positions on the issue. And there are relevant rulings by the European Court of Human Rights.

UNESCO is the United Nations specialised agency with a mandate to defend and promote freedom of expression and its corollary press freedom. UNESCO is currently mandated to conduct a comprehensive and consultative study on Internet-related issues, the results of which should inform the organisation’s reporting to the 38th General Conference in 2015. This over-arching study includes freedom of expression and privacy, amongst its issues of concern. And the privacy of journalists’ sources is a focus that has been identified at the nexus of these two rights.

There are other relevant UN resolutions driving the UNESCO study being undertaken by the World Editors Forum. They include the Human Rights Council resolution on the safety of journalists (passed in September 2012) that stressed “the need to ensure greater protection for all media professionals and for journalistic sources.”

Also significant is the 2013 Report of the former UN Special Rapporteur on Freedom of Opinion and Expression, Frank la Rue, which states: “Journalists must be able to rely on the privacy, security and anonymity of their communications. An environment where surveillance is widespread, and unlimited by due process or judicial oversight, cannot sustain the presumption of protection of sources.”

More recently, UNESCO has resolved that “privacy is essential to protect journalistic sources, which enable a society to benefit from investigative journalism, to strengthen good governance and the rule of law, and that such privacy should not be subject to arbitrary or unlawful interference.”

(Above: Guy Berger and Julie Posetti at the 2014 World Editors Forum in June in Turin)

Asked how difficult it is to navigate tensions surrounding the balance between freedom of expression and privacy as regards journalism, UNESCO’s Guy Berger told the World Editors Forum:

“Law enforcement agents may cite a legitimate interest in overriding journalists’ interests in privacy of sources, and each side may have a case. The balance has to be made with reference to the widest public interest and the longer-term effect of information flows when sources are not guaranteed confidentiality.”

“Any court of law that weighs the issues needs to keep in mind the international standards of necessity and proportionality. In order to pursue justice based on press revelations, it is often not necessary to demand that a journalist disclose secret sources – other channels are available. In addition, only a portion of information may be needed for law enforcement authorities to do their job. So, nuance is needed when resolving tensions,” he said.

The results of the study being undertaken by the World Editors forum (within WAN-IFRA) will feed into the wider UNESCO Internet Issues study. Additionally, the full report will be published by UNESCO within an update of the UNESCO World Trends report.

UNESCO’s recent publication World Trends in Freedom of Expression and Media Development states that more than 100 countries worldwide have laws or jurisprudence providing legal protection of journalists’ sources, and a handful of countries, including Portugal and Mozambique, even specify this protection in their constitutions. This finding is based on a five-year old study by Privacy International, which, in turn, is based upon an earlier study titled Silencing Sources completed in 2007. The new research outlined here will build on these sources, and it will also tap into WAN-IFRA’s extensive worldwide network, to compile updated information with an emphasis on issues pertaining to digital developments during the past seven years.

Editors, publishers, industry bodies, legal authorities, media law academics and relevant NGOs from around the globe will be surveyed and interviewed as part of the UNESCO-World Editors Forum research project, which will produce case studies highlighting key issues, and make recommendations regarding the legal protection of journalists’ sources in the digital era.

If you would like to contribute to the journalists’ sources and privacy study, please contact the project’s Chief Researcher Julie Posetti (julie.posetti@wan-ifra.org), or Research Assistant Federica Cherubini (federica.cherubini@wan-ifra.org). They would be especially pleased to receive information about relevant laws and policies internationally. You can also tweet @julieposetti and @fedecheubini using the #SourcesStudy hashtag.

The research is expected to be published in 2015.

Disclaimer: While this blog post was written within the framework for research conducted for UNESCO funded by the Swedish International Development Cooperation Agency (Sida), ideas, opinions and findings are not necessarily those of UNESCO or Sida and do not commit the organisations.