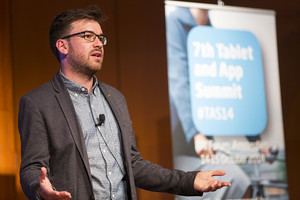 In order to explain the Guardian’s very special approach to rethinking their mobile apps, Grinsted took a dive into Platonic philosophy.

Ten years of mobile devices is an extraordinarily short amount of time. So if we are really honest, the argument runs, we have to say “I don’t know”. Any why? Because no-one knows.

What the Guardian’s data did show is that mobile is starting to cannibalise, to become the habitual device. Or as Grinsted puts it, “The most physical contiguous part of you that you’re not born with”

So from this position how can you craft the best experiences?

The Guardian’s mobile team decided to build in the open and involve as many people as possble – i.e. not just stakeholders but users too.

They built prototypes to explore the nature of the feed, social filtering and storytelling.

For example they tested a curated feed versus the polar opposite, all news being mediated by your social network.

Starting themselves with a cross-functional app team, the most basic first alpha release was deployed to all 500 Guardian staff – avoiding surprises and involving everyone emotionally in the project.

At this point they had no idea about future plans to rebrand, develop a dedicated mobile CMS or the emergence of wearables.

Sprinting to an open beta

Every two week development sprint ended with readers coming in to review prototypes. But that was not enough, so the Guardian launched a beta programme, allowing them to involve over 10,000 users before it was released.

This was a very vocal and active community. As Grinsted said “Occasionally hilarious, but always inciteful and helpful”.

We still no not know everything

They soon realised the “alpha data was worthless”. Internal staff were simply not representative of users. And indeed there have been 15 updates since launch.

And there was yet another problem as the app went live, the positivity bias of their lab testers versus the feedback from the app store ratings. With a lack of consensus, it remains unclear, for example, whether lists are preferred to cards on the home screen.

Wearables as the even more unknown unknown

Grinsted has a hunch that smart watches could be about curation not consumption – to save something for later reading on the app. And guess what – the Guardian has already been trialling it.

If you’d like to get involved in the Guardian’s ongoing beta development process and learn more about how they’ve applied the same process on the web, check these links:-

http://goo.gl/UMF2J8 – for the Android beta programme