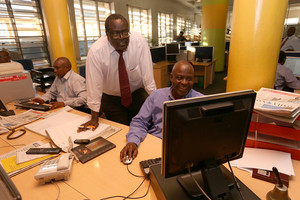 Concern about journalists’ safety flares and fades in Africa in tandem with incidents of physical attacks on media professionals. Unlike the continual debate about media freedom, the very survival of journalists as human beings, oddly, is never seen as an essential ingredient of democratic development.

Yet the ability of media to hold government to account – the skillful coverage of authority, conduct of open debate and management of media messages – depends first and foremost on the existence of journalists, the men and women who put their lives at risk for the truth to be known and unwelcome opinion to be expressed.

It is a reality which, unfortunately for media, is more readily recognised by governments and all who fight for power than by the wider public for whom media promotes free expression. Which is why, almost without exception, attacks on journalists are perpetrated by state agents and shadowy political forces jostling for political or economic control.

As a result, threats to the safety of journalists in Africa appear to increase or decline in direct proportion to a country’s political stability, respect for law, degree of media professionalism and the public’s ability or willingness to stand up for its civil rights.

South of the Sahara, the countries in which journalists’ safety have come under severe attack include Tanzania, Rwanda, Congo, Togo, Mali and war-torn Somalia. The incident involving Kenya’s First Lady was more the exception than the rule in this east African state, but it illustrates the hidden dangers faced by the media where journalists’ safety is taken for granted.

Theirs is a less mortifying danger than that faced by journalists in Tanzania, where in the past two years alone, three journalists have been brutally killed or maimed because of their work. In the west of the country, Issa Ngumba, a reporter with a community radio station was found strangled and shot dead while the chairman of the Tanzania Editors’ Forum, Absalom Kibanda , had his eye damaged and teeth knocked out, again, by unidentified assailants.

Political transition appears to put journalists in particular jeopardy. Tanzania is hurtling towards a general election which threatens the ruling party’s 50-year hold on power. In Mali, the editor of Le Republicain was arrested and beaten up during  a coup attempt in March after his paper questioned the exorbitant salary of the rebellion’s leader.

Similar hostility was experienced by media in the Central African Republic earlier this year after the ousting of President Francois Bozize by Islamic rebels. To the east, war-torn Somalia, where 16 journalists have been killed this year alone, is considered the world’s most dangerous place for media professionals.

It used to be that their prominence in society and the public-interest nature of their work guaranteed journalists protection from even the most blood-thirsty outlaws in society. Not anymore, as attacks on reporters by drug gangs and guerrillas from Mexico to Nigeria have shown. Today, training in personal safety is becoming as essential in some African states as the basic skills of gathering facts and writing.

Whether the threat to journalists is driven by conflict or political intolerance, the place of journalism, and the media of which it is the lifeblood, has to be recognised and secured for the sake of national stability. A society where media professional feel threatened because of their work will forever remain a fertile ground for bad government, civil strife and all-out violence.

About the author: Joseph Odindo writes on media issues in Africa. He was involved in advocacy and formulation of policy concerning journalists’ safety at the Nation and during his term as chairman of the Media Council of Kenya in 2013.