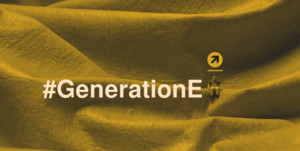 It is a growing trend but with few migrants officially changing their residency, such fluidity comes at the expense of documentation and records. Accurately calculating and mapping the overall data of migration flows across the continent has been so far unachievable.

The phenomenon is complex to monitor and current estimates reportedly largely underestimate in its size and significance.

This is where Generation E comes in – the first pan-European, cross-border investigation into the quantitative and qualitative nature of young European migration: a combination of a data-driven approach, a participative crowdsourcing campaign and traditional interviewing.

Founder and Project Manager of Generation E, Jacopo Ottaviani says the project aims to shed light on this information, highlight the lack of official pan-European studies, and collect stories and contributions from this set of European expats.

Jacopo OttavianiOttaviani is a journalist specialising in data-driven investigation and cross-media storytelling. He has a wealth of experience covering migration, starting with The Migrants Files project. For Generation E – a project funded by the Journalism Fund and supported by key media organisations Il Fatto Quotidiano (Italy), El Confidencial (Spain), Radio Bubble (Greece) and P3/Público (Portugal) – he is leading a team of seven journalists and designers from the four targeted Mediterranean countries.

“[Generation] ‘E’ stands for Europe, Expat, Erasmus, Escape. We start from the, slightly romantic, assumption that the young European expats are laying the foundations of the future European social fabric,” Ottaviani said.

“Because of the economic crisis that hit the world in 2008, South-European countries face very high unemployment rates. Young people leave the South of Europe to look for a job, so it’s very topical at the moment.”

According to the latest EU Labor Force Survey report by Eurostat, youth unemployment figures from August this year for Spain sit at 53.7%, Italy 44.2%, Portugal 35.6% and 51.5% in June for Greece – all among the highest in the European Union.

“We narrowed down the investigation to Spain, Italy, Greece and Portugal as they belong to the countries which felt the consequences of the economic crisis the most, [though] we started from the assumption that it’s usually a combination of driving factors,” Ottaviani said.

“Not all of them leave the South because of unemployment … for example a young person could leave for sentimental reasons, eagerness for adventure or to develop his/her working career.”

According to Ottaviani, many young migrants avoid bureaucratic processes connected to changing their country of residence. “This procrastination directly affects the official statistics of young migrations. People who don’t change their residence are difficult to track,” he says.

The Spanish National Statistics office counted 133,000 young migrants between 2008-2013, according to Ottaviani. The country’s Superior Council of Scientific Investigations notes in its 2013 study that national sources “substantially underestimate emigration … it is more likely that the [total] number [of emigrants] is closer to 700,000 people between 2008 and 2012 than the official sources’ estimate of 225,000.”

In Italy, 135,000 young adults have officially left since 2010. But similarly to Spain, official statistics do not take into account those who do not formally change their residence. “Estimates circulating speak of at least twice the number of expatriates,” Il Fatto Quotidiano reports

Global Voices reports that Portugal has 2.3 million emigrants (20.8% of their 10.5 million population), second only to Malta in terms of percentage of population amongst EU member states. Within these numbers, INE, Portugal’s national institute of statistics reports almost 200,000 Portuguese people aged 20-40 have left Portugal since 2010.

Records from Greece are further limited, if not non-existent: the Hellenic Statistical Authority say they do not record Greek emigration flows.

It is this kind of fragmented data that Ottaviani and the Generation E team hope to piece together to better inform understanding and appreciation of the current situation regarding young migrants. They further hope to bring awareness about the broad lack of official pan-European documentation and studies, as highlighted by this issue, while making the available information more publicly accessible.

Generation E is planning to publish all its content in each of the four native languages (Spanish, Italian, Greek and Portuguese) as well as English.

“I am enthusiastic to see cross-border projects are getting more numerous. It is challenging to publish stories in multiple languages and coordinate a team of journalists on multiple platforms. But I believe that the outcomes are worth the effort, both in terms of impact and diversity of perspectives to approach topics.”

In this sprit, he said he intended the campaign to gather “stories, stories, stories, including stories that clash with the stereotypes of the sad migrant who leave his or her country depressed … we believe that some migrants go abroad driven by the curiosity and positive feelings.”

“Generation E is aimed to create and keep a network of people who share experiences, that is why we launched a Twitter hashtag #GenerationE, a Facebook page and Facebook group where young migrants can share their experiences and get to know each other.”

The four partnering media outlets in their varying languages are also reporting on the project as it develops, propelling the crowdsourcing campaign. Only one week after launching, 1000 stories had already been gathered from participants, according to Ottaviani.

The final part of this investigation will be co-published at the end of October amongst all four media partners. It will comprise of insights and results from the crowdsourcing, the deep-data investigation with maps and interactive charts, and interviews with researchers and decision-makers from Europe. “We would like also more organic data from the EU. And more social and economic policies to support,” Ottaviani said.

NOTE: Are you a European expat from Greece, Italy, Spain or Portugal and under 40? You can contribute to Generation E here.