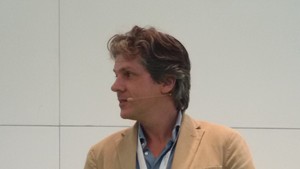 With programmatic ad transactions up 249 per cent in Europe over the last 12 months any publishers who have yet to test the RTB (Real Time Buying) waters must be feeling the pressure to do so and wondering where to start. Bram Smits, CCO at MADS gave a particularly compelling presentation on RTB and his thinking on why publishers who have yet to dip their toes shouldn’t follow the typical route of experimenting with desktop banners, but should instead go straight to rich media mobile ads to trial RTB.

His point was that it is mobile ad spending that is taking off, and that has the greatest potential to bring in serious money and yet, as he pointed out, any publisher looking at the numbers now; mobile usage figures, mobile ad budgets, and Facebook’s profits, can only be asking one question; “why do we earn so little?”.

The answer he suggest is to cut out the middle man and take control of the ad sales. Then to skip desktop banners and go straight to mobile because “mobile performs better than desktop so if you are going to test with something then do your testing with something that brings more money to the table and mobile rates are increasing.”

Smit also showed some innovative targeting for mobile ads noticeably an application using selected GPS points along a metro system at which point any user of the publishers apps can be served relevant ads to their news app. That then combined with a one-click Google map to show the individual the route to the nearest shop associated with the offer.

If that wasn’t enough Smit concluded that the other key step in maximising revenues and regaining control was to create those rich media mobile ads in house – “it adds value for your advertiser, it creates extra revenues, and it saves on costs”.