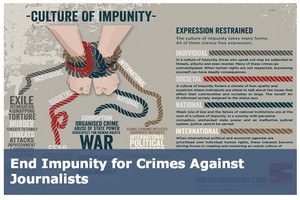 They, along with the others, continue to receive death threats from various quarters, mainly Islamists or ethnic militant groups.

These are the lucky few. For the hundreds, if not thousands, of journalists on the frontline, who are gathering information and reporting from some of the remotest and most dangerous regions in the country, security arrangements are missing or markedly different.

These poorly paid journalists, often with little or no training of how to operate in hostile environments, are constantly in the line of fire. Most of the over 100 journalists and media workers killed in the last decade come from this vulnerable lot. Some died because they were at the wrong place at the wrong time, others because they were ill-trained to cover incidents like bomb explosions. But the vast majority were targeted because an armed militant group, or the security agencies, did not like their work and decided to silence them.

So, it is not surprising that, in the past few years, Pakistan has come to be regarded as one of the most dangerous countries for journalists. Ironically, the press freedom that Pakistani journalists won after struggling for three decades has, in some ways, become their own nemesis.

The rise in religious extremism in the tribal areas bordering Afghanistan, and the nationalist insurgency in Balochistan, their fallout in other parts of the country, and the ensuing conflict between the militants and security agencies, has made objective journalism a dangerous challenge. Neither side has liked the idea of truthful reporting.

In fact, the constant demand of the warring groups has been to cover only their version of events – often without editing – which is unacceptable to most journalists. Impunity is thus the order of the day. Both senior journalists and district correspondents continue to be threatened directly by militant leaders and senior intelligence officials. At times, they are kidnapped and tortured; in many cases they are killed in cold blood.

Recently, media activist Adnan Rehmat prepared an impressive study, Reporting Under Threat, that compiles the accounts of 57 journalists who have been victims of the prevailing situation. Of them, 48 described how they had received direct threats from militants and intelligence agencies; the details of the rest, who unfortunately had been gunned down, have been narrated by their journalist colleagues.

The study primarily focuses on those who have survived such threats but, perhaps understandably, stops short of explaining the circumstances in which most of the over 100 journalists and media workers were killed in the last few years. However, from the accounts of the survivors, one can gauge that non-state actors to a large degree, and security agencies to some extent, may have been responsible.

Until a few years ago, the most troubled area for journalists to work from was the Taliban-infested tribal belt. Today, the worst situation is in insurgency-infested Balochistan. Dozens of journalists have been killed there. The sparsely populated district of Khuzdar is the worst affected. The press club there was shut down after the killing of its president, general secretary and seven other journalists over a period of six years.

More recently unidentified gunmen barged into the office of a local news agency in the provincial capital of Quetta and killed three people, including two reporters. As the newspaper Dawn recently commented in an editorial: “With the latest incident, those waging war on journalists in Balochistan have sent the message that nowhere in the province can they consider themselves safe.”

The fact that in all these years the killers of only two journalists – Wall Street Journal correspondent Daniel Pearl and Geo TV reporter Wali Khan Babar – have been brought to justice, is enough to suggest that this culture of impunity will continue.

“In a way, the media’s travails reflect the political profile of Pakistan – the takeover of public space by mafias, some armed with guns, others with venom, while people’s rights and truth are nobody’s business,” wrote leading human rights activist I.A. Rehman in a recent article.

There is no point in debating whether more journalists have fallen to bullets sprayed by extremist groups or to the coercive methods of security agencies. Because if the killers of those murdered in the last decade are not arrested, and attempts to silence the media continue, it will always be the state that will be held responsible.

About the author: Zaffar Abbas is the Editor of Dawn, Pakistan’s oldest and most     prestigious English language newspaper. This is his 33rd year in journalism. During this period he has worked for several news organisations, including the BBC as one of its Pakistan correspondents.

Mr. Abbas is a keen follower of both Pakistani and regional politics, and has covered the civil war in Afghanistan from the days of the Soviet occupation. The last few years have been mostly dedicated to reporting and analysing the fall-out of the so-called “War on Terror” on Pakistan, the tricky peace process between India and Pakistan, as well as the complicated political developments in the country.

Because of his bold and objective coverage of armed militancy in the country, he twice faced the wrath of different militant groups but luckily survived with non-fatal injuries.

Mr. Abbas is a strong advocate for ethical journalism in Pakistan, and has long been campaigning for the creation of a safe environment for working journalists in the country. He is also member of the Board of the World Editors Forum.