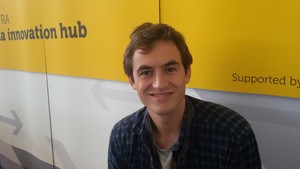 Snapchat is not an obvious platform for news media.

In the past publishers strove to be the “News of Record” so the idea of news and video that disappears within 10 seconds sound depressingly disposable. Self-destructing news, however, just might be the way to reach certain audience sectors.

“In Denmark everyone under twenty is using Snapchat so I thought let’s try to put news media onto that platform if that’s where they all are. It’s a format that people use because it’s exciting – there is buzz when you look at Snapchat because you have just ten seconds to see it and if we can deliver news on a platform that immediately creates that buzz well then that’s much more interesting. I get a lot of Snapchats from other users saying how cool it is to get news updates while you’re checking your friends’ updates.”

It’s also a natural for UGC – since Snapchat is designed as a fast and direct means for individuals to interact. Anders put together his Snapkanalen news feed with an InDesign template and an application that allows news to be fed in instantly.

“I have great content from a user in Hong Kong who sends videos and pictures showing her life in the city so I created a system where I send her questions and she replies with two minute programs.”

It’s also a fast way of pulling together (and even verifying) UGC from unknown contacts.

“I can do a Facebook graph search and find the friends of my friends who happen to be in, say, Syria. Then I see who has Snapchat and reach out for content which can then share with thousands.”

That worked recently for the Independence referendum in Scotland. “I started with a Facebook update in the morning asking if anyone in Scotland had views and videos to share and one hour later I had three Snapchatters updating me with content that I could send out on my newsfeed.”

If you’re a Snapchat user, then you can sign up to SnapKanalen directly. If you’re not a Snapchatter then you might want to know that it is not just Anders and the Danish teenagers who are playing with the platform. Other users of Snapchat for news include the Danish national broadcaster, Norway’s NRK, The Huffington Post, Mashable, and NowThisNews.