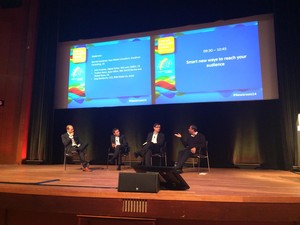 Data analytics allow newsroom staff to see when and how readers are accessing their content in some detail. At the Wall Street Journal, visits from mobile as a share of monthly unique visits are expected to pass 50% in 2015 or 2016, said EMEA Digital Editor John Crowley. He told the Summit that already at some times of day, mobile visitors almost reach a majority, therefore it is crucial to think about how mobile content is packaged. The WSJ.com team has done this, building a responsive blog format that offers free, mobile-friendly content to draw more people to the site.

The blog content takes several different formats, Crowley said, with key themes being short and concise. One such format is the ‘listicle’, with pieces such as 5 things to know about the Ebola outbreak. Another is ‘The Short Answer’ which, in the form of a short Q&A, can be produced much more quickly than a standard story. The Short Answer is also a video feature, offering a two-minute explanation on what you need to know about a topic, such as the disappearance of flight MH370. The Numbers blog produces short pieces on “the way numbers are used and abused, and the At a Glance feature breaks down a complex story into 300 to 400 words.

Visitors via these blog features tend to continue on to read more content on the WSJ website. Big digital projects such as the WW1 100 Years, 100 Legacies feature have allowed WSJ to reach new communities beyond their traditional reader. The site’s atomised content allows people to choose the areas they are interested in and Crowley said many ended up consuming 16 or 17 items. The project took six months to produce but garnered three million page views. A similar format was used to remember Robin Williams after his death.

Another emerging way to reach users on mobile is through chat apps. Trushar Barot, Apps Editor at the BBC World Service and BBC Global News has been experimenting with services such as WhatsApp, which he sees has having a huge untapped potential audience.

WhatsApp’s growth rate in terms of user numbers has been far faster than Facebook or Twitter, Barot said, and as India has the most users the country has been a focus of the BBC’s experiments. WhatsApp has no publishing-friendly features, noted Barot: “it has no desktop version, no CMS, so everything has to happen from a mobile handset, which is a challenge”.

However, Barot said the “chat app push alert is the most potent content delivery system in history”, allowing users to reach almost 100% of their followers. This is in notable contrast to social media platforms for example, where it is unlikely that an update will reach a significant proportion of that user’s followers).

Push alerts can also be used to effectively deliver short audio clips, Barot said, as the files are downloaded immediately and available for the user to listen to when they are ready.

Chat apps such as WhatsApp have further potential for news gathering and user-generated content – Barot provided the example of during Typhoon Haiyan in the Philippines, where WhatsApp proved a very effective way to gather information as the audience was using it.

Such apps allow news organisations to be more intimate with their audience, and the BBC takes advantage of this, using emoji to communicate with users and encouraging its audience to use them in return to express how they feel.

WhatsApp isn’t the only chat app that the BBC uses: it has also experimented with Blackberry messenger in Nigeria, Mixit in South Africa, WeChat in India and Line in Asia.

It’s also possible to engage readers using more traditional technology. Grig Davidovitz, CEO of RGB Media Inc, spoke at the Summit of the importance of reaching users in the online digital place where he believes nobody misses anything: the email inbox. It’s essential to see the email newsletter as a product in itself, he said, as a daily edition that reflects the identity of the site, both in terms of look and feel, and user experience. It should be a daily homepage, he suggested, citing both global business news outlet, Quartz and The Times of Israel, an online-only publication that has grown with no marketing budget.

Davidovitz said the email functions as a kind of ‘time freezer’ of aggregated content: a user should be able to be confident that the most important information from a news outlet is waiting for them in their inbox. It should link to the website abundantly, but should also stand as a product that the reader can appreciate alone, with an element of ‘finishability’.

Overall, the session showed that to find and acquire new readers in the digital age requires a multi-faceted approach involving studying how readers use both new devices and new communication platforms, and targeting and packaging content accordingly.