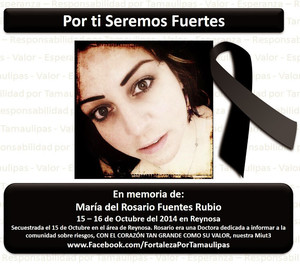 In the Mexican border city Reynosa, a citizen journalist known by the Twitter handle @Miut3 (account now deactivated) reported on what traditional media would or could not: cartel activity. Citizens have taken to social media to fill the information void left by traditional media, simultaneously placing themselves at risk of being targeted by cartels. @Miut3’s only protection was ‘Felina’, her online pseudonym.

But ‘Felina’ became the cartel’s most recent victim.

#reynosafollow FRIENDS AND FAMILY, MY REAL NAME IS MARÍA DEL ROSARIO FUENTES RUBIO. I AM A PHYSICIAN. TODAY MY LIFE HAS COME TO AN END.

The cartel had found her. They had accessed her Twitter account and they tweeted a photo of her dead body on the ground. Demonstrating the impunity with which cartels kill Mexican journalists, they used the hashtag #reynosafollow which is used to report cartel violence. The graphic tweets were shared (uncensored) by news outlets like the Panam Post and the Latin Post, while the UK’s Daily Mail published a blurred image of her body.

(Editors note: The graphic image in The Daily Mail linked to above highlights the real risks of reporting on cartels in Mexico. While some newspapers in the region published these pictures unedited – we have chosen not to do so, and we have also decided not to link to those on ethical grounds).

Reporting on crimes against journalists

Javier Garza Ramos, The World Editors Forum’s Newsroom Safety Advisor says news media need to be scrupulous when reporting on crimes against journalists to prevent contributing, unknowingly, to the criminal cause.

“The media can unwittingly play along as a messenger to their cruelty when showing graphic content of these executions,” he said.

He said cartel criminals or terrorists can learn tactics from each other via wide dissemination of public executions. The deplorable ISIL beheadings have illustrated the emergence of graphic representation of murders going viral on the internet. Garza says this does not necessarily mean there are more executions, but rather executions are now more public.

“In the past the news about public executions were limited to the city or country where it happened, but with viral media that’s not the case anymore. So an
execution in Syria can be seen in Mexico and vice versa.”

Fuentes was an administrator for the citizen news hub Valor por Tamaulipas (Courage for Tamaulipas), which has more than 100,000 followers on Twitter and over half a million on Facebook. Their anonymous coverage ranges from identifying members of organised crime to missing people announcements; all topics that traditional media in the area are not covering.

In 2013, as a result of their extensive coverage, a cartel offered a reward of 600, 000 pesos for anyone who would reveal the names of the sites administrators.

The site administrators protect themselves with anonymity. Traditionally, those with sensitive information pass it on to a journalist as a confidential source. But journalists in some areas like Reynosa are not safe to assume that mediator role, according to WAN-IFRA’s Area Manager for Latin America Rodrigo Bonilla.

“In provincial cities and towns run by cartels, the information concerning them is tightly controlled via violence and intimidation. Criminals walk into newsrooms and advise what to cover and not cover, specially regarding their turf wars with other cartels,” he said.

“They pay a visit to a journalist, give them a mobile phone, and say they will be calling him/her to inform on where they have killed opponents so the media outlet covers it. And they show you a picture of your house, or your family, just in case it ever crosses your mind not to abide.”

Citizen journalists have therefore been pushed to ‘go direct’; knowing that information they pass onto journalists regarding cartel activity will not be reported.

Bonilla said cartel criminals are murdering people like Fuentes without any punishment.

“These criminals wanted to not only shut down a voice, but also, send a chilling message to other potential citizens. But this is possible because of the levels of impunity that protect these criminals. [This] reveals the Mexican State’s inherent weakness to control the country’s territory”, he said.

Fuentes’ kidnapping has been confirmed and the photos depicting her murder have been verified. Her body has not been found, however UNESCO’s Director General Irina Borkova has condemned her murder, declaring “It is important that the authorities do all in their power to bring those responsible for the killing of Ms Fuentes Rubio to justice, as this could help strengthen media independence and the right of information.”

Mexico is ranked seventh on the CPJ Impunity Index (2014). In the past decade, sixteen murders of journalists in Mexico have remained unsolved, with persecutors exempt from any kind of consequence.

In 2013, UNESCO recorded 91 killings of journalists worldwide. So far this year, the UNESCO Director General has identified 70 assassinated journalists.

This Sunday November 2nd marks the first United Nations International Day to End Impunity for Crimes Against Journalists and editors are challenged to commit more to reporting on cases involving crimes against journalist going unpunished.

WAN-IFRA’s report titled “A Death Threat to Freedom: A Report on Violence Against Mexico’s Press,” shows how the information flow is controlled by cartels, resulting in entire regions of Mexico experiencing complete ‘information blackouts’.

In Reynosa, in the state of Tamaulipas, social media has served as a tool to inform a public that would have otherwise been left in the dark. The report’s author Rodrigo Bonilla, says in areas like Tamaulipas, the role of social media is vital.

“[It] can be a most valuable tool to denounce abuses of power, corruption, and hold authorities to account,” he said.

On the other hand, the public dissemination of a murder is a result that has long been desired by the cartels. Bonilla says the ‘Felina’ case is no different from what the country sees on a regular basis.

In 2011, an influential blogger was found decapitated in Tamaulipas with a message beside her body reading “I am here because of my reports and yours.” Fuentes’ murder has been used to communicate the same chilling message, only this time via Twitter.

Journalists, media organisations, citizen journalists and those contributing to coverage of cartel crime have all fallen victim to this message.

Increasingly, the journalists under attack are ‘citizen journalists’. UNESCO’s International Programme for the Development of Communication (IPDC) says ‘journalism’ covers “those active in community media and citizen journalists who use social media and digital outlets to produce, curate or distribute significant volumes of public interest content.”

In countries like Mexico, it can often be a case of silence or death. Anonymity is a crucial security measure that cannot afford to be compromised.

“[The murder of María del Rosario Fuentes Rubio] sent a chill across [social media users] in Tamaulipas because they see what happens if they slip up in their security,” says the World Editors Forum’s Safety Advisor Javier Garza Ramos.

“Do a risk evaluation to detect vulnerable points, identify potential attackers and plan safety measures accordingly. Be very careful of what kind of digital activity shows up openly on one’s mobile or tablet.”

When considering cyber security, Jorge Luis Sierra, director of the Knight International Journalism Fellowships Program told the World Editors Forum in July that there is more than just information at risk.

“The digital risk is sometimes the first step in a plan to attack a journalist.”

Note: The World Editors Forum is offering a range of content free for publication, including this article, to mark the first UN Day to End Impunity for Crimes Committed Against Journalists.