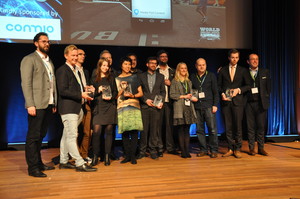 Best Digital Advertising Campaign: General Election – Kleine Zeitung of Austria who had a restaurant serve unwitting customers dishes without even asking what the wanted before serving them a ‘bill’ inviting them to vote if they didn’t want someone else to make their choices for them. Click here for more about this campaign.

Best Use of Online Video: How to put a human on Mars – by the BBC News team, and in particular journalist Neil Bowdler, whose love of space led him to look a the challenges of putting a human on Mars. “We got a team of great scientists together – so good NASA gave them a call” reflects Neil. “And then there was the whole team at the BBC doing the animations and building this beautiful web site.” Click here to see this story.

Best Data Visualisation Project: Null CTRL – Dagbladet. “We had a huge series of articles concerning online security in Norway,” explained designer Auden Aas, “and we had a lot of interesting data to showcase so we made an interactive video showcasing the three most exposed areas of life; at home, at work and in the city. For each one we populated them with hotspots for things like printers and servers that were vulnerable so people could learn about it without having to read technical documents.” Click here for more on this series.

Best Mobile Service: Apple Daily NGA – Apple Daily. Apple Daily’s outstanding mobile service became all the more important this year with the development of the Umbrella Revolution democracy protests in Hong Kong. As Christina Lo Man Ki, Director of Digital Strategy, pointed out in “the last few days we have people outside our offices with trucks blocking us in so we can’t put our paper out – but we have very good mobile service.” Click here for more about Apple Daily’s mobile service

Best in Tablet Publishing: The Age – Fairfax Media. Click here for more about The Age’s tablet.

Best Reader Engagement: World Chess Championship 2013 – Verdens Gang. “The rights for the event were snapped form under our nose by a national broadcaster” remembers VG’s Espen Olsen, “but we we wanted to make chess easier to understand while showing the game’s complexity. We got 300,000 watching every day and chess became hip and trendy; in the end the hosts were using our hashtags. Click here to see the coverage.

Best Outstanding New Product: Godt.no – Verdens Gang. A busy year for Verdens Gang and a good one for Ingrid Reime, the Interaction Designer who says of their food site Godt.no that “it is a great way to package the niche service of food articles and integrate a lot of user engagement with pictures and recipes from bloggers and users while giving users the opportunity to save their own cookbooks. Click here to see the Godt.no website.