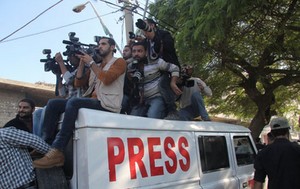 There has never been a more dangerous time for journalists. They are being killed and imprisoned worldwide in record numbers. They face daily threats, attacks and intimidation from private individuals, non-state actors, and government officials who seek to silence them. The overwhelming majority of these crimes are committed with impunity.

Those responsible for 9 out of 10 journalist murders go unpunished.

Freely available for you to download and publish below is a series of editorials from our World Editors Forum members that highlight the issue of impunity. We urge you to share your experiences of dealing with impunity and the safety of journalists so that we can help inform our global community of how best to tackle threats to freedom of expression. Together, we are strong enough to #EndImpunity

Here are links to the editorials which are free to anyone to republish with attribution to the World Editors Forum and the authors.

And here is a piece of reportage on impunity we are offering in addition, with attribution.

The Plan of Action aims to creating of a free and safe environment for journalists and media workers, both in conflict and non-conflict situations, with a view to strengthening peace, democracy and development worldwide. Its measures include, among other undertakings, the establishment of a coordinated inter-agency mechanism to handle issues related to the safety of journalists as well as assisting countries to develop legislation and mechanisms favourable to freedom of expression and information, and supporting their efforts to implement existing international rules and principles.

To further reinforce prevention, the Plan recommends working in cooperation with governments, media houses, professional associations and NGOs to conduct awareness raising campaigns on a wide range of issues such as existing international instruments and conventions, the growing dangers posed by emerging threats to media professionals, including non-state actors, as well as various existing practical guides on the safety of journalists. (Download the Plan, or visit the website to learn more)

Where the #EndImpunity campaign began

In November 2011, IFEX launched its inaugural campaign to end impunity, after the IFEX membership identified the issue of impunity as a major obstacle to freedom of expression.

The campaign drew global attention to unresolved cases of aggression against individuals who were simply exercising their free expression rights and marked, on 23 November, the anniversary of the 2009 Maguindanao, Ampatuan massacre, when 58 people – including 32 journalists and media workers – were murdered in the Philippines. To date, none of the perpetrators have been brought to justice.

Since the first year, there have been notable developments in the global campaign against impunity. In December 2013, the United Nations passed a Resolution on the safety of journalists, and declared 2 November the International Day to End Impunity for Crimes against Journalists.

See also the Committee to Protect Journalists’ (CPJ) latest research on the anti-impunity struggle: ‘The Road to Justice’