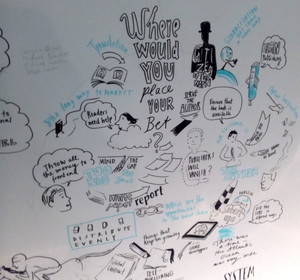 Or as he put it, “Why are so many people investing time, money and enthusiasm in an industry that’s ‘doomed’?”

For Bhaskar the question is rhetorical. He has produced his own list of 300 digital  startups in the publishing industry – viewable as a Google Doc here, and clearly sees life and vitality in this tech innovation.

In a panel discussion with strong relevance for their counterparts in news publishing, Jakob Larsen, head of consulting at Schilling in Denmark, had brought together some of the book publishing companies surveyed for Schilling’s white paper “Where would you place your bet?” Participants were asked how they would invest, if starting again in the current market with a blank slate and, say, €10 million.

Bhaskar was bullish, suggesting he would put 25 percent of the sum into indie games developers like Simogo, the makers of the highly successful storytelling/game hybrid Device 6, or interactive narrative experts Failbetter Games.

Although he recognised that Amazon has been successful as a platform and a fairly safe tech investment, the long-term future remains in creative Intellectual Property – with brands such as Mickey Mouse and Harry Potter likely to outlive Netflix and iTunes.

For Georgina Atwell, Founder of Toppsta.com, a social marketing startup based in the UK, the beauty of the new tech ecosystem is that “you can start a company and run it almost entirely through social media”. In other words, the barriers to entry are lower then ever before.

The biggest debate was about how to operate in a globalised world where an English language book printed in the UK can undercut a translation published in Denmark.

The view seemed to be that small publishers and startups can operate in “global niches,” with Bhaskar drawing attention to new publishers like And Other Stories that are really concentrated on making translations available in other markets, while using their own secret sauce to select the best authors.

The wider message was clear, globalisation and the fast pace of technological change have created opportunities for niche players to publish at low cost and and a vibrant startup scene – a message that resonates both in book and news publishing. Whether this is an opportunity or a threat, remains an open question.