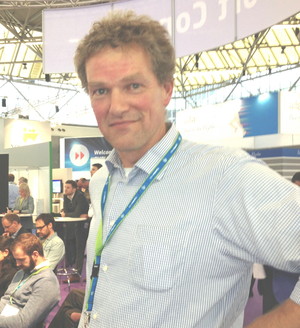 “We give them a place to work and they help us innovate,” he says.

The program is still in its infancy, having started only six months ago. Thus relations between the startups – five so far – and the well-established publishing house are still in the “getting acquainted” stage, Brouwers said in a brief interview after his presentation.

Nonetheless, “they really infect us,” he says. “They are located in the center of the building, so everybody has to pass them by,” he says.

TMG does not accept just any company interested in cooperation. “We look for a fit,” says Brouwers. The startups are not told what to do; “they remain self-sufficient,” he says.

While the group hopes to benefit financially from the arrangement, “We have a primary goal and that is learning,” says Brouwers. “There is a risk that they will go away and take our ideas,” but that is accepted.

More information is available (in English as well as Dutch) on the TMG Startups web site.